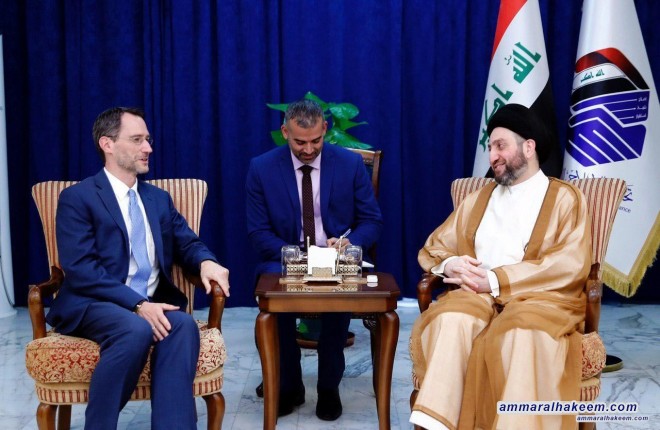 Head of the Reform and Reconstruction Alliance, Sayyid Ammar al-Hakim, in his office in Baghdad received Charge d'Affaires of the US Embassy in Baghdad, Mr. Joey Hood Sunday, 19-5-2019

His eminence with Hood discussed bilateral relations and developments in the political situation in Iraq and the region.
Sayyid al-Hakim stressed that the recent American-Iranian escalation is causing concern to all countries in the region and threatens its security and stability. His eminence welcomed some recent statements indicating the parties' keenness to mitigate the conflict, and wished to be an introduction to find suitable solutions and spare the peoples of the region scourge of wars and policies of sanctions.
Sayyid al-Hakim stressed that Iraq has close relations with both sides, making Iraq in a spot to play a mediation role to reach convergence of views and end the tension. His eminence also stressed that the security of the diplomatic missions in Iraq is the responsibility of the Iraqi state. In turn, these missions should send positive messages about the political and security situation in Iraq, considering that Iraq has reached advanced stages that makes no reasons for evacuating the staff or nationals of these missions from Iraqi territory.