During the ceremony of birth of Imam Al-Hassan; Sayyid Ammar al-Hakim identifies the most appropriate steps for Iraq towards American-Iranian escalation, and calls on the government to share government program implementation progress 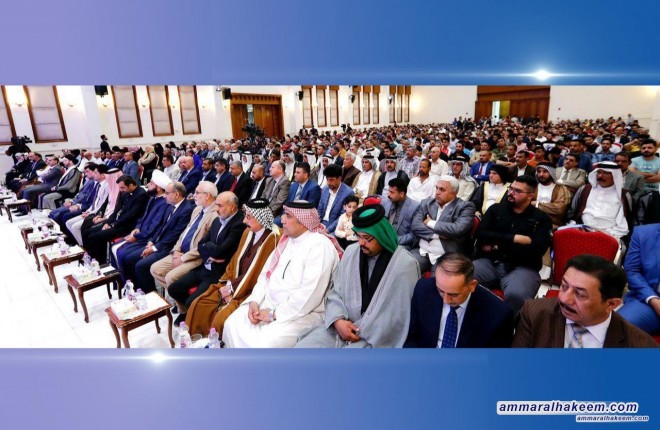 The Al-Hikma National Movement held a festive celebration in memory of the birth of Imam Al-Hassan Al-Mujtaba (peace be upon him) in Sayyid Ammar Al-Hakim office in Baghdad on the evening of Monday, 20-5-2019on the fifteenth night of the holy month of Ramadan

The ceremony included an important speech by the head of the Reform and Reconstruction Alliance, Sayyid Ammar al-Hakim, in which he highlighted the injustice that Imam al-Hassan was subjected starting from carrying out Imam duties and until his martyrdom when his coffin was attacked with arrows and his burial was prohibited from being next to his grandfather the Holy Prophet (peace be upon him) .
Sayyid al-Hakim explained the difficult political and psychological conditions experienced by the Islamic community during the Imam al-Hasan's Imamate, embodied in the subjective gatherings and entrenchments within Muslims lines, in addition to the huge media practices used by Muawiyah as psychological war with the followers of Imam (peace be upon him), and the big army of Muawiya (the Sham army) confronted by a few supporters around Imam al-Mujtaba (peace be upon him). And as well as the existence of opportunists, hypocrites, vested investors, and the community of the court who care about the formality of religion rather the essence and philosophy, who were sowing doubt and frustration among the believers at any step taken by Imam Al-Hassan (peace be upon him), As well as the Kharijis who were pretending to follow Islamic rulings but in fact they followed an incomplete understanding of Islam similar to Daesh in modern time, as well as the presence of many who are controlled by public opinion casted against Imam Mujtaba (peace be upon him) and community mind mobilization to target the character of Imam Al-Hassan (peace be upon him) and his project, as well as some of the pro-Imam who had a problem in understanding the reasons behind positions of Imam Al-Hassan (peace be upon him) and his decisions although they are loving followers.
Sayyid Al-Hakim also pointed out that other challenges was faced by Imam Al-Hassan (peace be upon him) thst preceded his Imamate, including devastating wars which claimed lives of thousands of Muslims, the psychological breakdown and horror that these wars have left in the hearts of Muslims, accusations, rumors, quarrels, buying off loyalty, differences in tools of battle and widespread financial corruption.

Regarding political issues, on the recent American-Iranian escalation, his eminence suggested that Iraq should take five steps to avoid war in the region. "This is a top priority, If war breaks out, it will extend to other areas in the region until it reaches a world wide war and Iraq will be the first and most affected. The importance of muting extremists and all sides blowing into the fire in such inflamed and escalating conditions. "Iraq First" and "Iraq National Interest First" should be the fundamental orienting the compass Iraq and politics. And the importance of controling distrusting and discrediting to maintain unity and cohesion in our country, so not to cause internal decisions over issues occurring in other countries. And performing with the strategy of a mediator not a medium, and Iraq has deep relations with both sides in which qualify Iraq to take the role of the mediator with the perquisite of Iraq believing in itself and its potentials.
Sayyid Al-Hakim indicated that the governmental program is comprised of "120" pages, and it is time bound, and after seven months of announcement, the people, political powers and the Parliament have the right to know about the progress of fulfilling promises, and in this context his eminence called on the government to issue a manifestation statement mentioning the progress of what has been done and not been implemented so far along with the reasons for delays, and his eminence also stressed that the government should release a statement clarifying reasons for the delay in a number of issues.