Marking the establishment of Badr: Sayyid Ammar al-Hakim calls to recourse to the people and provide necessary services for citizens 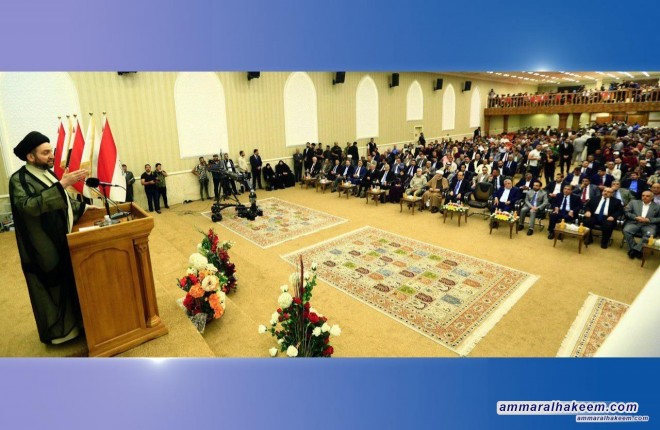 In his speech at the central celebration of Badr Organization marking its thirty-eighth anniversary; Head of the Reform and Reconstruction Alliance, Sayyid Ammar al-Hakim, congratulated the Badr Organization for this "dignified" occasion which coincides with the anniversary of the Great Battle of Badr, that transferred Islam to a new era Thursday evening, 23-5-2019
His eminence indicated that the most important factor in the victory in this Badr battle is the reassurance of heart in achieving victory, faith and trust in God and prayers, as well as the great impact caused by the rain on the night of the battle, which made nature an additional factor to achieve this victory for there was no water in the war zone, and the sleepiness that God gave to the Muslims on the night of the battle that made them well prepared and rested to fight.
Sayyid al-Hakim recalled five distinct roles in the formation of Badr Organization; The first role is contributing to overthrow the Baathist regime, and participating in the operations prior and after the blessed Sha'aban Intifada (1991 uprisings). The second role after the fall of the regime in 2003 in the establishment of a new Iraq and writing the Constitution and holding elections, the third role is represented in forming of popular committees and countering Daesh terrorism at the time. The fourth is its essential role in contributing to the formation of popular mobilization forces and countering terrorism. The fifth role is contributing during the stage after the military victory over Daesh and other victories addressing the political, economic, social, cultural and other challenges.
Sayyid al-Hakim also stressed that Iraq, after overcoming the war and sectarianism, the new battle requires reliance on God and devotion, rely on young people and youth drives and new blood for the continuousness of movement, institutionalization and organized action, being close and recourse to the, consolidation of national identity, providing necessary services to citizens, combating corruption by action and sound procedures, not just slogans, and transforming Iraq fragile security into a sustainable security.
Regarding the regional situation, his eminence stressed the seriousness of the regional challenge at this stage and that it has direct repercussions on Iraq “We must focus on the five priorities which are; Avoiding war with all our strength, because the first and biggest victim of this war is Iraq, if this war sparked it will spread to the region and the entire world. Adjusting rhythm and muting the extremists’ voices from all parties, because any spark can ignite the war in these difficult circumstances. Prioritizing national interest and there are no interests of Iraq in this war, this requires a national logic to work on addressing any repercussions or escalation in this war and giving no opportunity to those who want to ignite war. Internal and national cohesion and avoid the throwing disloyalty and discredits and accusations between Iraqis. Adopting a strategy of mediation between the two countries, and this have many contexts; the first is to be active and influential in this arena for the interest of our country”.