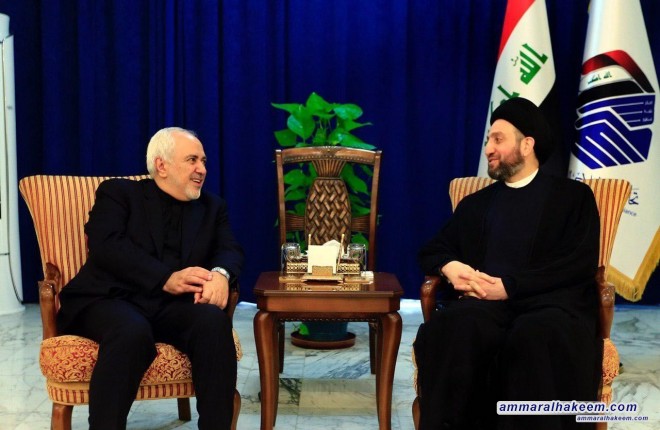 Head of the Reform and Reconstruction Alliance, Sayyid Ammar al-Hakim, in his office in Baghdad received the Foreign Affairs Minister of Iran, Dr. Mohammad Javad Zarif Sunday, 26-5-2019
His eminence with Zarif discussed means of enhancing bilateral relations and the latest political developments in the region.
Sayyid al-Hakim emphasized the seriousness of the recent escalation between the United States and Iran, stressed, in this context, the importance of appeasement in all parties' efforts to avoid the occurrence of war, end tension and spare the region the repercussions of this crisis. His eminence also pointed to the importance of Iraq's role as a mediator between the parties to the crisis to mitigate the conflict and rid the peoples of the region the specter of wars and policies of siege and starvation.
Dr. Zarif reviewed the nature of the cooperation existing between iraq and Iran and means to activate previous consensus and the importance of strengthening relations between the two countries according to common interests on the political, economic and social levels.