The Political Authority of the Reform and Reconstruction Alliance holds its regular meeting and expresses concerns towards security situation in Diyala and Kirkuk. 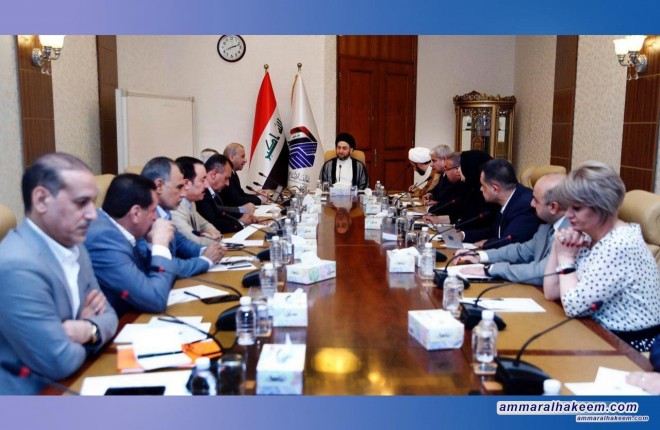 Under the chairmanship of Head of the Reform and Reconstruction Alliance, Sayyid Ammar al-Hakim, the political authority held its regular meeting in the office of his eminence in Baghdad Saturday, 8-6-2019
The meeting covered agenda subjects and primarily the developments of the political situation and completing the government cabinet, assess performance the House of Representatives and the government, plus the security situation Diyala and Kirkuk provinces.

The meeting concluded by issuing an official statement in which the Reform and Reconstruction Alliance reaffirmed the importance of achieving balance and real partnership in the decision making, and the need to work on consolidating the unity of Iraq and the cohesion of its components of all affiliations. The Alliance also stressed that the government is to abide by the deadlines set by the government itself to end the special grades and proxy employment through serious engagement with the political powers to end this issue with considerations to take competence and professionalism as a standard to determine whom would be assigned to occupy private grades away from political orientation.

The statement also read that the Political Authority urges the House of Representatives to complete passing laws that are in direct contact with citizens' lives and contribute to the advancement of development in the country. The Reform and Reconstruction Alliance emphasized that one of its priorities during the next phase, building and strengthening the state structure, is forming Federal Service Council and passing the Council's laws.