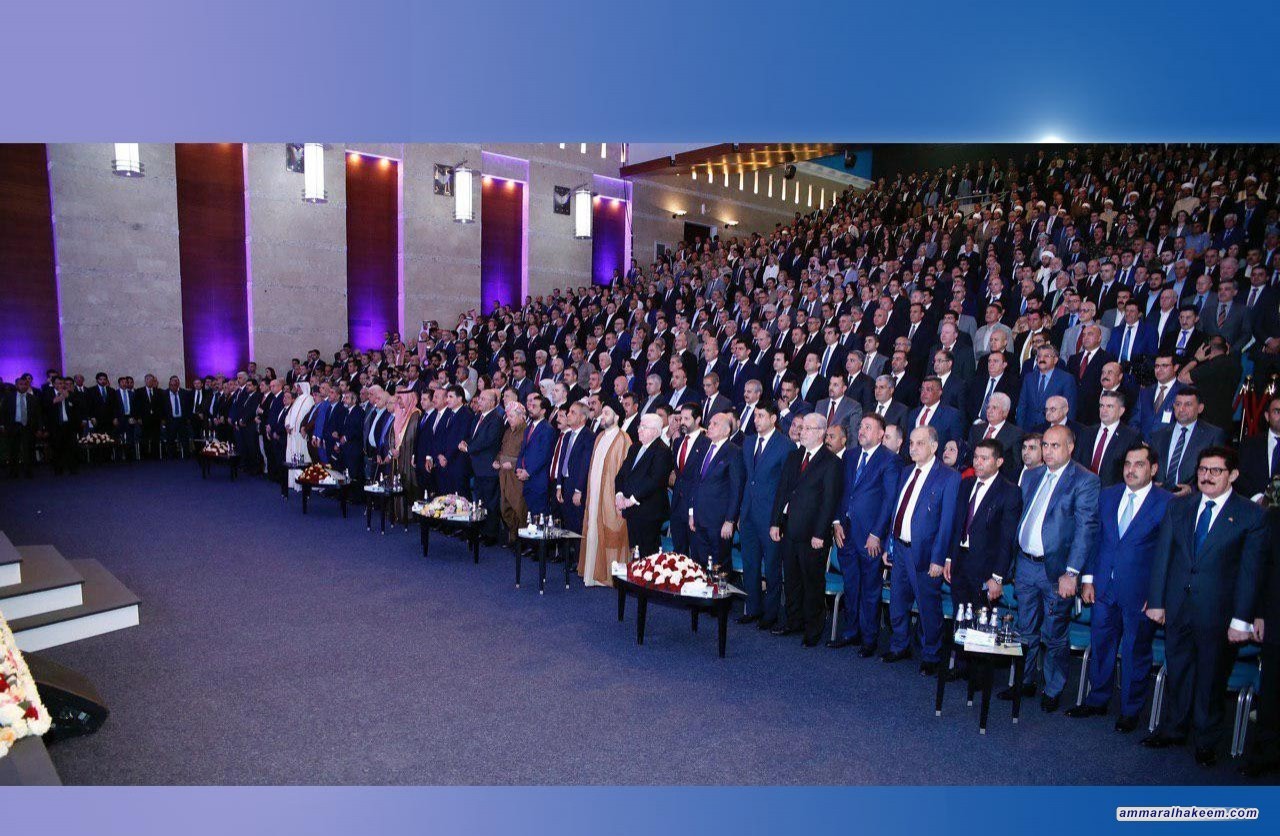 From Erbil: Sayyid Ammar al-Hakim congratulates Nechirvan Barzani being elected President of the Kurdistan region and calls rally within the decision of the Iraqi state

In a speech at the ceremony of the inauguration of the new President of the Kurdistan region, Mr. Nechirvan Barzani in Erbil Monday 10-6-2019 the head of the the Reform and Reconstruction Alliance, Sayyid Ammar al-Hakim, congratulated Mr. Nechirvan Barzani being elected as President of the Kurdistan region of Iraq, and praised the outstanding leadership role of former president of Kurdistan region, Mr. Masoud Barzani, who was and still a national Iraqi and Kurdish leader with a clear mark in the course of events and developments in Iraq, and "reminds us of his late father, "the leader" Mullah Mustafa Barzani and his brother, the late "great" Mam Jalal Talabani". His eminence also recalled the historical relations of Imam al-Hakim with Mullah Mustafa Barzani and the Kurdish people and his historical fatwa in defense of the Kurds in those difficult circumstances in which armies of the dictatorship planned to genocide the Kurdish people.

Sayyid al-Hakim called for a number of points that must be remedied and addressed quickly. The first is to clear the points of disagreement among regions' powers, and between the region and the center with a high national spirit, keenness and altruism of a responsible leadership. His eminence also stressed that the specificity enjoyed by the Kurdistan region under the Iraqi constitution is more distinguished, unique, broad and sensitive to diversity compared to other federal states. His eminence called to turn the page of the past to a new Kurdish dream of living in this country, sharing its wealth fairly and develop it, and ensuring reconstruction, prosperity, sovereignty and independence, stressed that the dreams of sons are not necessarily the same dreams of their fathers, because conditions change and people develop.

Sayyid al-Hakim also emphasized that Article 140, the law of oil and gas, border crossings and the government budget, and other issues, are issues that remain real stations to trigger crises between the region and the Center from time to time, which should be resolved and zeroed by national efforts devoted to Iraq and its people, "We are not minors, and we will not be the target of external enemies seeking to perpetuate and exploit the gaps according to their own interests, and Iraq has been and will remain a master of itself and no guardianship of others. We will not allow this."

Sayyid al-Hakim also called for confronting internal security challenges with awareness, wisdom and high-level coordination between the region and the center, stressed that the military victory on terrorist Daesh would not have been achieved without the unity of the region and the center together, and maintaining this victory is a joint responsibility between them as well. "Our liberated cities are waiting for the return of life and reconstruction, and our displaced people are impatiently waiting to return to their homes and villages that unjustly and aggressively were forced to leave". His eminence stressed that recent incidents in Kirkuk, Diyala and the Baghdad belt is a threat to everyone and national security and requires immediate solutions.

Sayyid al-Hakim also called unify the Iraqi national position towards the conflict in the region, and geostrategic position enjoyed by Iraq in the region is important, warned of hidden hands trying to target the power of Iraq by creating division of discourse and national position. His eminence also stressed rally within the decision of the Iraqi state through active and positive participation in the making and the development of a national position that is responsible, respect the prestige of the state, keep the high interest of the state and invests regional and international turnout to assist Iraq.

Sayyid al-Hakim also stressed the need to benefit from the Kurdish experience and pass it to the rest of Iraq's provinces in the center, south and west, pointed out that this distinctive experience has its constituents and, main factors that contributed to its success and glamor. The most significant of these elements is the unity and solidarity, and unity of political lines within the Kurdistan region in one place hand, and between the region and the center in Baghdad on the other hand.