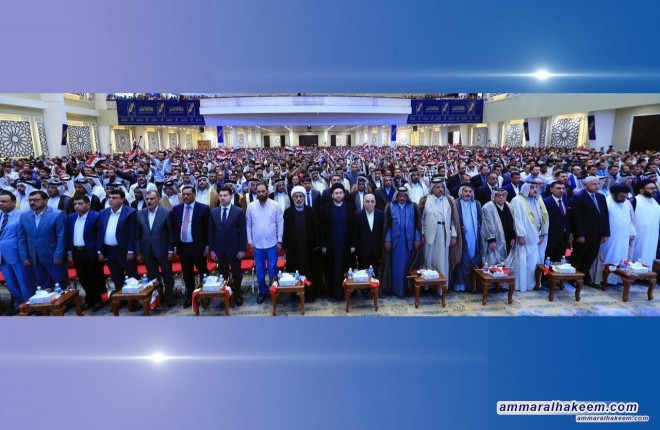 Head of the Al-Hikma National Movement, Sayyid Ammar al-Hakim, during his eminence speech in the held in his office in Baghdad marking the 99th Memory of the eternal 1920 Great Iraqi Revolt Saturday 29/06/2019
His eminence called the three presidencies and the Iraqi judiciary to provide legal and practical cover to protect the political and societal opposition and to respond to its logic in reform and remedies, considered opposition is a real test of the democracy practice and establishment of peaceful transfer of power principle, pointed out that the Al-Hikma Movement will work on forming shadow government, stressed to allow it to exercise its role in monitoring and evaluating the government performance and provide the government with statisticsan, information and accurate data regarding govermantal performance in all its aspects, and added: "There is no monopolization of power, no monopolization of monitoring and evaluation, and no monopolization of remedies and reform" , called for enactment of laws supporting this role for the opposition, such as, the right to access information, freedom of expression and other laws, and indicated "The opposition does not target specific characters, but curricula, and it is wrong to put unrealistic red lines on opposition performance".

His eminence described an authentic Iraqi national revolution away from any foreign and external agenda, with Religious Authority leadership, tribal tools and arms, a revolution for independence and sovereignty, against injustice, corruption, political subsidiarity, discrimination and unequal distribution of wealth, a revolution to build an independent Iraqi state, and succeeded in establishing the modern Iraqi state.

His eminence indicated that there is a national interest in establishing the national political opposition and make it successful without overlooking the opposition power, and added: "Through this national opposition we will present our vision regarding the practical measures required to achieve real reform in the country, and apply close monitoring within the constitutional and legal frameworks to confront the policy of chaos, political apathy and justifications to lack of service, the non-state behavior, quotas and political instability and hypocrisy, extortion, corruption and political subsidiarity and interpretations of accusations and treachery against others and the series of useless alignments over interests", and added:"We embarked to be loyal to our goals, which we launched several years ago, either national majority or national political opposition. We have made great efforts to form the national majority but we have not succeeded in achieving it. The result of this effort is the Reform and Reconstruction Alliance, and we worked with our partners to institutionalize it and turn it into a large national project. And we have decided be a national political opposition to form the other wing that balances the democratic system." His eminence expressed confidence in supporting this national opposition and being surrounded by tribal sheikhs, social actors, civil society organizations and the media, that would cooperate to make it a success considering it the second cornerstone of democracy. And stated "Our doors are open and our hands are extended to all patriots, to support this opposition with thought, opinion, correction and stances. "
His eminence explained that it is no coincidence that the month of revolution one century ago is the same month the birth of the constitutional national constructive political opposition" , and noted "declaration of [national opposition] is the third step of our steps to consolidate the national democratic work in the country," and elaborated:

"In 2017 we announced launching of the Al-Hikma National Movement as a national youth project unbiased to any sectarian, ethnic and regional, political polarization, and then bore arrows of criticism and harsh misinterpretation and faced challenge and skepticism. In 2018 we participated with our partners in establishing the Reform and Reconstruction Alliance and met with the Al-Bina Alliance in a move that overcame sectarian and ethnic alliances, and we bear the bitterness of distrust and ready-made accusations. In 2019, we declared the national political opposition to go beyond the political quotas, consensual politics and the mistakes of democracy that we have made in the past 15 years, and to establish the traditions of the state and its construction, and we must prepare for accusations and discrediting and defamation for the sake of the homeland."
Sayyid Ammar al-Hakim stressed that the 1920 Revolt led to the establishment of the state before (99) years, and that the move of the national opposition represents a fundamental pillar in building of the state. And added "As the heroes of the 1920 Revol fought for the independence, unity and sovereignty of Iraq, we will work within the framework of the national opposition to protect Iraqi sovereignty. And as the figures, leaders and heroes of the 1920 Revolt sacrificed their lives to keep Iraq cherished, proud, and independent."
His eminence called spare no sacrifices to properly carry out the entrusted national task shouldered by the opposition and handing the flag to future generations with pride, and indicated:" We will raise our voices high and take the constitutional and peaceful legal steps to defend the major interests of the people, and we can only do this by following the path of those heroes and apply the lessons of patriotism, independence, sovereignty and dignity planted in the conscience of this nation. Yesterday, we had th honor to participate in establishing the democratic pluralistic federal system and drafting the constitution. Today, we have the honor to establish the free and proud national opposition. Yesterday our fate was to oppose the dictatorial regime with arms to overthrow it. Today our fate to oppose the government through peaceful, political, constitutional opposition by words and pen, and actionable legal steps to maintain, preserve, clear impurities, mistakes and deviations of the democratic system".
Head of the Al-Hikma National Movement stressed that the opposition means ending the political consensus, renouncing quotas and ending the strange phenomenon of all in, all opposing. Previous governments were like Noah's Ark, all part of it, and everyone opposes it and no one bears responsibility", indicated that "the opposition is opposing the government and not opposition to the state and the regime,we are part of the political system and state foundation, and present in the Council of Representatives and in all influential social and political facilities, yet we are outside the government, which lasts four years and changes, while Iraq remains and the state remains and we are part of it". And indicated that "the Al-Hikma National Movement choose the national opposition to put an end to the political comity based on personal, party and factionalism interests, a phenomenon has expanded and threaten the security and social peace, "there are those who see themselves above the law, there are those who abuse public money, and there are those who are lenient in the security issues, and there are those who cover other failures and serious deviations in the political process and general performance, and there are those whoe stalling the exposure of the corrupt", pointed out that all the issues aforementioned is a result of favoring, comity and weaknesse in confronting and decisiveness in which jeapardise the prestige of the state and the law, thus can only be confronted with a national political opposition that screams and blames mistakes and deviations with courage, boldness and clarity,

and added "We have chosen the national opposition to confront political exclusivity in forming of the government and in country's decision and administration, which is not flawed if the individual decision-makers recognize their full responsibility for the success and as well as failure of government performance", and emphasized that "the country needs a systematic national political opposition to sort out political approaches, clearly define scope of responsibility, identify mistakes, appreciate achievements and positives, and provide our people with a political alternative and multiple options to choose what they deem appropriate for running the country", noted that "sorting out approaches does not necessarily mean that the opposition and the government are in conflict in everything. If the government presented a program to combat corruption, developing agriculture, industry, investment and services, no one opposes these matters, but the opposition may be against the method to implement these important things such as the question of politicians? about the team? And timings? Priorities? How are crises managed? How do you market achievement? And dozens of other questions that are all serious discussions in the practical approach of the government to implement the government program.
His eminence presented an example regarding combating corruption, and stated:"Fighting corruption is an important slogan raised by the government and here comes the opposition to strongly support the government in the fight against corruption, but may disagree with the government in how to conduct combating corruption.. Is it through dismantling the system? Without targeting the corrupt? Or by targeting big heads, then the system breaks down? Do we demand everyone to submit documents on corruption and without it they are is not entitled to talk? A word of truth with hidden intentions", indicated that discrediting people is not proper, but the investigating phenomena is a task for the government and its supervisory tools and its competent bodies, stressed that "combating corruption should be similar to the fight against terrorism, and the fight against crime, the citizen should inform the government of suspicious act or a crime and the government investigate and identify criminals and terrorists", considered brandishing judicial complaints against all those who speak out of negative phenomena based on hearsay and circulated recitations an act of speech suppression and pre-empt the role of the opposition in performing their duties, described the Prime Minister, Mr. Adel Abdul Mahdi, a patriotic, sincere and a son of a decent family, and added ""We have a long history with Mr. Abdul-Mahdi, and many officials and ministers are respected as persons as well as their political side and on a personal level, we have no problems with them, but we play our role in the opposition to sort out the approach and expose mistakes to help them correct it"
His eminence addressed the patriotic youth of the Al-Hikma Movement and those who sympathized with the Al-Hikma in the role of the opposition and stated:"Every struggle has a price, and every foundation has a taxation. For each showdown there are bruises, for each stage there are men, and you are the men of this stage, the brave men and heroes of this stage, be steadfast and diligent and strive and endeavor for the sake of your Lord, your country, your people, your conscience, your future and the future of your children, and added"We have nothing but this homeland, and what we have to do is struggle, and we have no other option but steadfastness, and we have no weapon but pen and words and sincere pure heart and good deed and mobilize available resources to serve our people and our homeland ", and urged them: "evoke your values, principles and ethics in every step, every word and in every evaluation to others, disagree with honor and defend your country and your people and their interests with honor and strive in the cause of Allah and do not fear the blame of a critic".