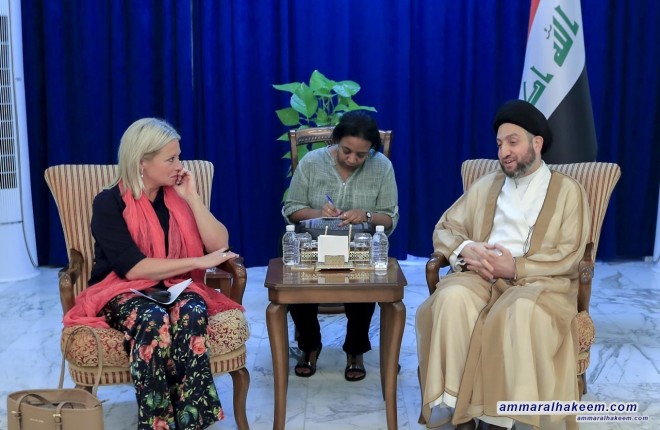 Head of the Al-Hikma National Movement, Sayyid Ammar al-Hakim, in his office in Baghdad, received Representative of the United Nations Secretary-General for Iraq, Mrs. Jeanine Hennis Plasschaert Monday 1/7/2019
His eminence with Plasschaert discussed latest political situation locally and regionally and the extent of the impact in Iraq. Discussions also covered opposition adopted by Al-Hikma National Movement at the current phase. His eminence stressed the need to understand and support the opposition for its role in stabilizing the political system and establishing the two wings of democracy in the coming phase, and renewed the call to supplement the opposition with visions and ideas for its maturity as a unique Iraqi experience.
His eminence stressed that the opposition role of the Al-Hikma National Movement is not targeting anyone, but aims to correct the path and mistakes and assess the course of the government, stressed to complete and conclude the issue of the government cabinet, which occupied a lot of time, and also called to give opportunities for Iraqi competencies to fill posts.
The representative of the United Nations confirmed that the international organization will give the opposition similar attention to the rest of the political blocs, especially in training, and emphasized the support of the United Nations to Iraq.