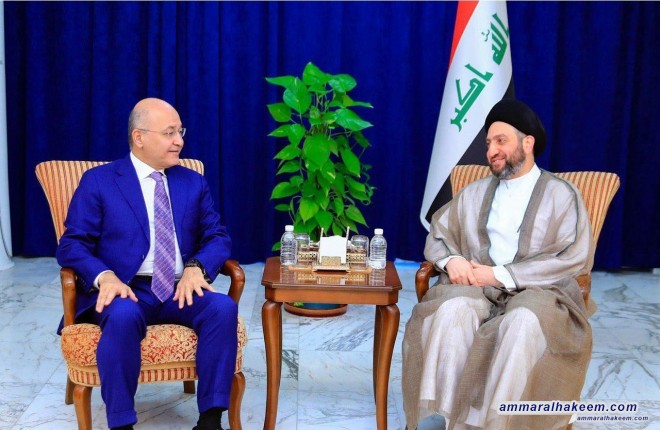 Head of the Al-Hikma National Movement, Sayyid Ammar al-Hakim, in his office in Baghdad received the President of the Iraq, H.E Dr. Barham Saleh Monday, 8/7/2019 discussed His eminence discussed latest developments in the political situation in Iraq and the region, both sides stressed the importance of keeping Iraq from regional and international engagement, and the need to prioritize the Iraqi interest.

His eminence stressed the need to provide support by the three presidencies to the national opposition adopted by the Al-Hikma National Movement as a wing of the democratic system in Iraq, and represents a necessity for the stability of the political system, and demanded enacting supporting laws including the right to access information and freedom of speech.

His eminence pointed out that the opposition Al-Hikma Movement is constitutional and aims to correct the path and shed light on negative aspects to avoid them.

Regarding the relations between Baghdad and Erbil, his eminence called prioritizing public interest over private interests. Both sides agreed that homeland wealth belongs to the Iraqi people and can not be compromised, and the necessity of tackling issues through resorting to the Constitution and the law.