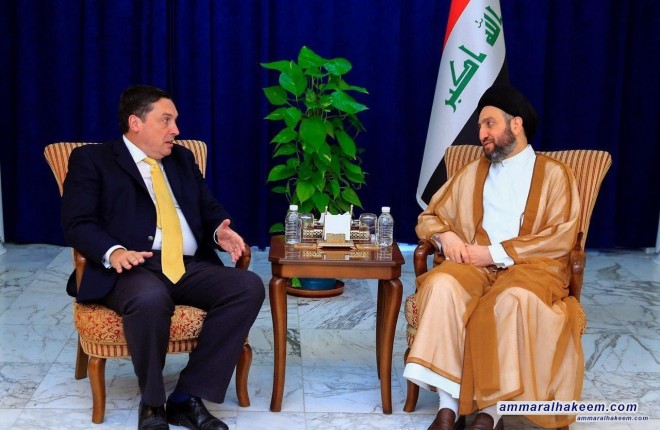 Head of the Al-Hikma National Movement, Sayyid Ammar al-Hakim, in his office in Baghdad, received the British Ambassador, John Wilkes Thursday, July 11, 2019
His eminence with Wilkes discussed latest developments in the political situation in Iraq and the region and means of strengthening bilateral relations between Iraq and the United Kingdom.
His eminence stressed the need to spare the region conflicts, tensions and wars and its dangerous consequences that will not stop at the geographical borders of the region, but will impact everyone, and cited the experience with terrorist Daesh, that disturbed the international community, and reiterated strong rejection to policy of besieging and starving peoples.
His eminence pointed the need to develop bilateral relations between Iraq and Britain and to invest promising opportunities offered by Iraq in investment and reconstruction, his eminence shouldered everyone to contribute in the reconstruction of Iraq considering that Iraq had fought terrorism on behalf of the world.
His eminence indicated that the opposition of the Al-Hikma National Movement is a constitutional political opposition aimed at correcting the path and the integrity of the political system in Iraq by forming the two sides of democracy; the pro-government and opposition, and emphasized that the opposition is aimed at mistakes so to be corrected and not target any individual.