Sayyid Ammar al-Hakim: priorities of the opposition are forming tbe shadow government and monitor implementation of the government program 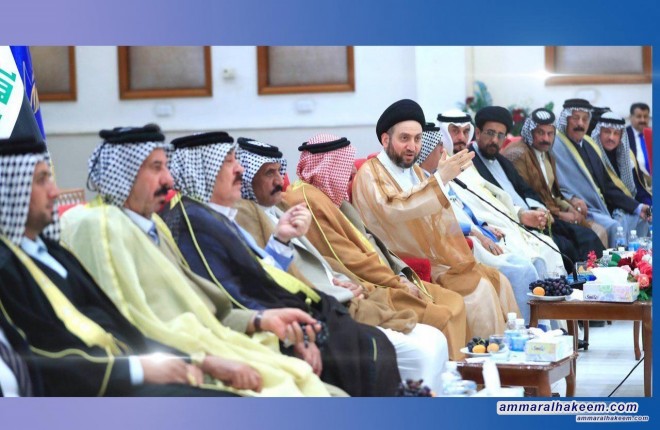 His eminence indicated expanding the opposition front, called on the tribal elders and figures to support the opposition's idea of opposition, because the opposition power reflects on the government's power and improve its performance, and explained that the opposition is part of the political system, stressed the need for parliamentary and popular pressure, and pointed out that demonstrations are one of the tools of pressure.
His eminence stressed that the Al-Hikma National Movement was offered a lot of posts and is still offered till this moment, but the Al-Hikma Movement does not want partnership in posts, but wants a partnership in decision making. His eminence diagnosed causes of weakness and the misdirected compass from the right direction, pointed out that the opposition intersected the way to those who participate in the government then criticize it, considered this a political hypocrisy, and pointed that the opposition imposed the line-up and the blocs are to choose sides, recalled that the quota is the product of participation of all, and eliminating quotas can be carried out by creating a pro-government team and another opposition that monitors and evaluate.
His eminence stressed the importance of the Iraqi tribes' law, praised the role of the tribes, and stated "the law must unite the tribe, and the existence of more than one person claiming leading the tribe will impact ths tribe", stressed on limiting carrying weapons to the state and follow-up on mechanism to implement the administrative order related to popular mobilization forces, and stressed that the Al-Hikma Movement supports the popular mobilization forces and their rights and against deviant behaviors and uncontrolled weapons.