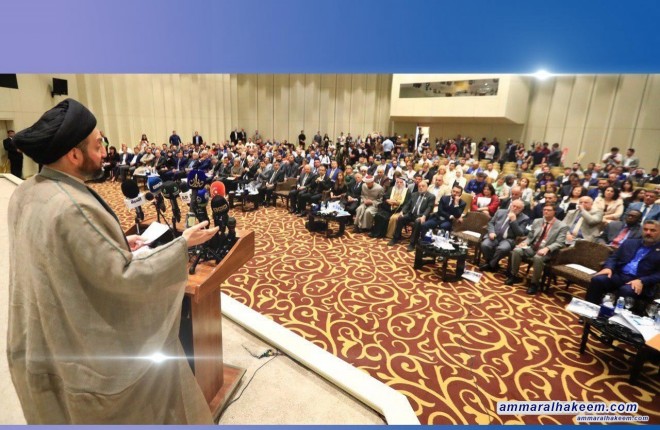 Head of the Al-Hikma National Movement, Sayyid Ammar al-Hakim, at the 3rd convention held by YAZDA marking the Yazidi genocide Thursday 1/8/2019, stressed on to work on reconstruction of liberated cities, specially Sinjar city, rearrange administrative and security situation of these areas, and to facilitate the voluntary resettlement of the displaced people to their areas, stressed holding Daesh elements and perpetrators accountable for causing this plight to the Yazidis and other Iraqi components, and to resolve the intersectionality between various security bodies of different affiliations conflicting on Sinjar soil and other areas while the components of the Iraqi people and citizens pay the price of these conflicts and scrambling.
His eminence called to deepening coordination and resolving problems between the federal government and the Kurdistan Regional Government, which will positively reflect on the stability of these areas, and the need to involve the people of the regions in the security and administrative arrangements that take place in such coordination. And also called to establish a memorial for the great sacrifices Yazidis and the remaining of the components to present a witness to the suffering and the terrible crime committed by Daesh and the legendary steadfastness of the people of Iraq, while warned of the return of a call to a tougher and tougher version if not addressed the reasons that led to the emergence.
His eminence warned of Daesh return shaped in a more severe and even harsher version if causes of its emergence are not addressed, and warned of the leniency of security and the lag in reconstruction and provision of services, noted that these and other factors can provide combined psychological conditions that assist terrorism and extremism to re-emerge in the liberated areas, and considered paying attention and reconstructing liberated areas, voluntary resettlement of displaced people to their cities and regions, provision of security in these areas, resuscitation of people businesses, recovery of economy and normal life to the liberated areas essential and necessary to prevent the return of a new versions of Daesh on the land of Iraq.
His eminence indicated that the best respond of Yazidis against terrorism and these tribulations is their coherence to homeland and to defend their history and civilization, pointed out that "departing to other countries as a result of existing coercive conditions is not a solution. It also contributes to the emergence of a new generation that is not ready to return to the original land and Iraq will lose an important component", and called for patience, endurance and cohesion to make it through this crisis, but to abandon the land and go to other countries is responding to Daesh project, saluted the Yazidi fighters who stood side by side with the Iraqi armed forces brothers in liberating these cities. His eminence also praised the supreme religious authority represented by Imam al-Sistani for their continuous care and keenness for this dear component, and added:"a salute to the governmental departments, armed forces and international organizations and the international community that stood, supported and assisted the Yezidis cause and rightful causes of Iraqis," expressed pride that the Al-Hakim International Foundation provided support to the Yazidi cause and held many seminars, conferences and workshops in the United Nations and international organizations and hosted a number of Yazidi women survivors to speak and be witnesses to the world for their suffering. His eminence pointed out that there are 15 international resolutions issued to condemn crimes against the Yazidis. The countries that contributed to the issuance of these resolutions included the United States, Germany, France and Britain,

his eminence expressed his gratitude for the efforts and considered Yazidi women survivors draft, which is adopted, drafted and sent by the Presidency of Iraq to the Council of Representatives represents an important addition to compensationa and medical and psychological care for survivors of this honorable component.
His eminence stated: "Targeting Yazidis is targeting all Iraqis, not just Yazidis, because targeting the Yazidis or targeting the Turkmen, targeting Christians or targeting Muslims, is aimed at the community peace and the fabric that brought Iraqis together,and is targeting tje social diversity in this homeland", and indicated that this crisis in not the crisis of Yazidis alone, but the crisis of all Iraqis, and added:"We have to stand together to deal with this ordeal and its consequences and complications. The targeting of Yazidis by the Daesh is an attack on Islam with its peaceful thinking and behavior. Daesh tried to present an ugly and bad images of Muslims and show the Islamic message in a brutal and cruel image, while Islam is innocent of all these behaviors. Islam is the religion of peace and coexistence and love "
His eminence held extremist ideology, its advocates, and all who provided and promoted media, political cover and safe passages for Daesh elements, and not only only Daesh, accountable for causing destruction, devastation, killings, captivity, and abuse against sacrileges that resulted in tampering with Iraq and Iraqis, and added:"And the responsibility is borne by all those who are short in protecting our people, including Yazidis, including officers who are negligent and any shortcomings or omissions by any party concerned or responsible for the security of citizens "
His eminence pointed out that the elimination of Daesh is not done through pure security measures, but through eliminating the causes that led to the emergence of all congestion among people and provided proper atmosphere for extremist and terrorists, stressed on handling mistakes and ensure preventing the return of a new version of Daesh that is more savage and brutal.