Sayyid Ammar al-Hakim: Those who target the opposition project want to keep Iraq weak, a subordinate overwhelmed by quotas, chaos and corruption 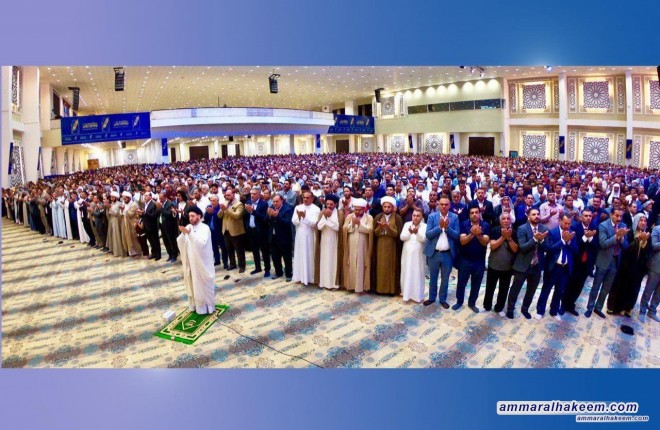 Head of the Al-Hikma National Movement, Sayyid Ammar al-Hakim, in Eid al-Adha sermon in his office in Baghdad Monday 12/8/2019 emphasized that Al-Hikma Movement has chosen constructive political and political opposition and will only be satisfied until fulfilling either change to equation on political level or change the equation on public level through democratic means, indicated Al-Hikma Movement endeavor to formulate an independent Iraqi project by recognizing the challenges and risks that target this project such as electronic warfare, political discrediting and anonymity and intimidating the society to change, his eminence wondered; for what all this?
The opposition "does not believe in the coup d'état and the dragging the ruler on the streets of Baghdad, does not believe in chaos and arms, and does not want to undermine the regime, abolish the constitution and the law," and explained that those who target the opposition want to abort the project and eliminate every attempt to break the traditional rules, want to keep Iraq weak and subordinate, overwhelmed in chaos, corruption and quotas, his eminence called upon the powers that formed, supported and are influential in the government and its ministries to show courage, frankness and commitment to adopt the option of pro-government so to distinguish areas of responsibility clearly and people know the pro-government powers, which bears responsibility for achievement and failure in government performance to be rewarded or hold it accountable, indicated that will end the phenomena of all being part of the government and all are opposing the government at the same time.
His eminence pointed out that the Al-Hikma Movement choose the opposition after recognizing the opinion of the people and read the people frustration at the government's ability to meet the people ambitions. The Al-Hikma Movement became before two options; to support the government and lose the people or to win the people and oppose the government, Al-Hikma Movement choose to win the people, and added: "The opposition will remain committed to its constitutional and ethical approach and exercise its opposition role with the intention of making reforms and applying fairness, criticizing mistakes, avoiding subjective targeting and avoiding extortion in questioning ministers or other corrective steps."

Sayyid Ammar al-Hakim described the government report on what has been achieved in the past period a necessary addition to the work in the government and a recognized precedent for the government practice, indicated that the government report has been subject to scrutiny, analysis and review by experts from within and outside the Al-Hikma Movement, pointed out that "the report" shows exaggerated figures, percentage mistakes, and narrative repetition that have undervalued it and unprofessional, the report also clearly exposed that the government suffer from unforgiving routine, a hampering bureaucracy, and a clear lack of coordination between ministries and government sectors on the one hand, and absence of vision, planning and prioritization on the other hand. And emphasized the presence of clear conflict between the ministerial platform and government report, government statements and the annual budget allocated by the government, recalled that the parliamentary follow-up committee on government program presented similar perceptions through a comprehensive review that the committee carried out.
His eminence called on the Iraqi studies and research centers, Iraqi elites and the media to highlight these problems in the report and encourage the government to provide effective solutions to them. And called upon the Iraqi Council of Representatives to activate its supervisory action through its specialized committees to follow up the achievements and failures of the government, highlight the strengths and weaknesses therein, and allocate a special session at the beginning of the next legislative period to study the government report and the reported deficiencies. His eminence added, "We hold the government accountable to what it has committed itself, and we only bear the government with what within its capacity in the framework of the ministerial platform, government report and decisions and actions issued by them."
His eminence stressed that the Al-Hikma Movement will continue to form the opposition front in cooperation with the political and popular powers that share opinion in opposition to the government. This front will be announced when work is completed, and explained that “one of the output of this front is the shadow government, which will represent the tools of the opposition to monitor and vet government performance in a professional and objective manner”, described education a barbed, complex and pressing issue to all Iraqi families and needs radical solutions to establish an integrated, sophisticated and modern educational system, called for a “major educational revolution that stop wasting human potential, financial resources and stop psychosocial repercussions through a thoughtful, scientific and modern change of curricula, methods and educational environment to suit the variables of our time”, stressed to expedite assigning the Minister of Education, which assumes the leadership of this vital ministry to achieve this lofty goal away from the unpleasant political quota that caused vacant in this ministry during the previous period of government tenure, described the current educational methods rigid, focusing on memorizing information and did not develop to stimulate capabilities of comprehension, analyzing and creativity of the Iraqi student. In the era of information revolution memorizing information is not the basis in education and learning but the need to develop knowledge tools that help producing creative students eager for knowledge and development, attributed cases of repetition or dropping school to lack of student interaction with the educational method,” there is no failed or little intelligence student, but there is a method that is not desirable or ineffective.

Regarding demands of Engineers and High Education graduates
His eminence stated: "We stand in solidarity with any passionate youth who demands the government and society to provide job opportunities and a decent livelihood gained by his hand and sweat, those heroes did not go astray, did not take the path of illegal gain, did not drift towards drugs or violence and did not commit suicide, they stand tall and full of hope for the future to demand their rights in a civilized and legitimate way, and called upon the government to exert the utmost efforts to invest in these struggling young people clean energies, minds, hearts and hands, and added "Unless we make human beings, their dignity and needs the first priority in all our government plans, we will remain prisoners of absurdity, regression and failure." , pointed to increasing cases of intellectual, ethical and behavioral deviations such as atheism, drugs abuse and increasing cases of divorce and suicide, noted that these are bells of alarm and shows an imbalance in the Iraqi social structure, and the government institution bears the biggest responsibility to study these phenomena and their causes and to propose treatments required, and the need to engage religious, media, social, academic and elite institutions and political institutions in the process of treatment through its vast human, moral and financial resources.
His eminence praised efforts made by service councils in the offices of the Al-Hikma National Movement and their swift response to his call, and for the services and assistance provided and continue to provide to citizens through facilitating their paperwork and requests with various governmental departments in accordance with the context of the law and away from all sorts of bribery and financial corruption, and wished to continue serving the people and alleviate their suffering, “It is the right path to please God Almighty and to perform our national and humanitarian duty, people that we do not serve, we do not deserve to represent.”
On regional level, his eminence stressed the need to adhere to a positive neutral position to safeguard the interests of Iraq and its people, reiterated its strong rejection to the policy of peoples’ starvation, praised Iranian people patience, stability and integrity, and warned of the growing conflicts in the region and tense atmosphere that assist the growth of terrorism and endanger regional peace and security, and called on the key sides to sit at the dialogue table and accept peaceful and political solutions that protects the region the scourge of wars, destruction, extremism and hatred, pointed to an exceptional situation in the Arab region, where four of them lack an elected president (Libya, Algeria, Sudan and Tunisia), wished the democratic process success in these brotherly countries and to produce free elections reflecting the will of its people, and demanded the Arab League to redouble their responsibilities in such circumstances.