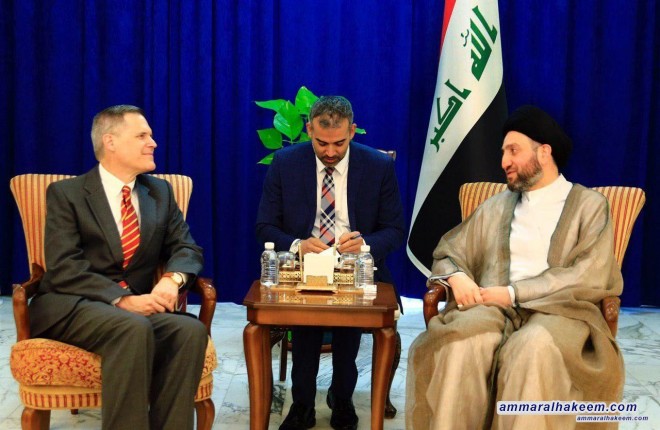 Head of the Al-Hikma National Movement, Sayyid Ammar al-Hakim, in his office in Baghdad received US Ambassador, HE Matthew Tueller Thursday 15/8/2019
His eminence with Tueller discussed bilateral relations between Iraq and the United States and ways to strengthen relations for both countries interests, and developments of the political situation in Iraq and the region.
His eminence reiterated warning against the consequences of escalation in the region, called for adopting political solutions and dialogue in addressing current existing problems.
His eminence pointed out that the nature of the opposition pursued by the Al-Hikma National Movement as political, constitutional and legal, stressed that it is an opposition seeking to correct the path and contribute to the consolidation of the political system and its democratic wings, and pointed that the challenge of services facing the government must be a top priority and the need to direct the government effort to promote reality of services in the country.