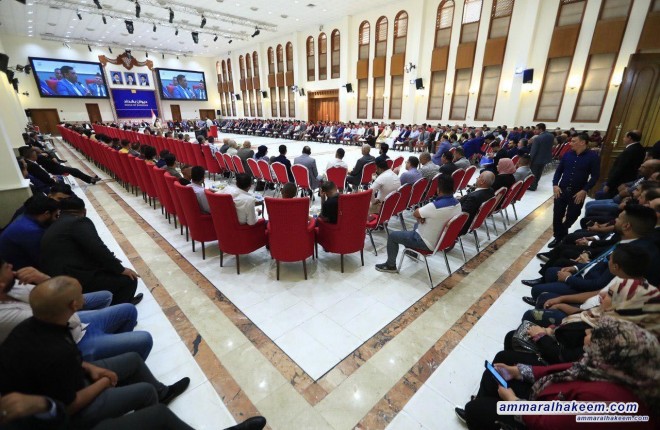 Head of the Al-Hikma National Movement, Sayyid Ammar al-Hakim, during a meeting with a group of elites, professional and community competencies in the Baghdad Diwan Saturday 17/8/2019 stressed the need to have eight points which make the government able to fulfill its responsibilities, including the maintaining Iraq's sovereignty, independence of Iraq political decision, provide a positive relationship between the components, the government and local authorities and between local authorities themselves.
His eminence explained that one of the eight points is to take serious steps to provide services through starting strategic service projects, plus providing a vision to strengthen the economy through supporting the private sector, jobs creation and providing facilities for investors and capital, and indicated the need to develop the security and intelligence system and intensify pressure campaigns against terrorist sleeper cells and make a serious move to combat corruption stemming from patriotism away from utilitarianism and the phenomenon of selling posts, and to deal with corruption as dealing with terrorism.
His eminence pointed out that the Al-Hikma National Opposition Movement is currently preparing the legal cover for the opposition by interpreting the articles of the Constitution and guaranteeing rights of the opposition in Council of Representatives law and its bylaws, and pointed out that the Al-Hikma Movement is seeking to form the opposition front and the shadow government comprised of experts in each detail and competence and work to question ministers who are weak, corrupt or have dishonorable history.
His eminence warned against continuing with irresponsibility excuse, called to clarity identity the team responsible in the government so that the public can reward or hold accountable, noted that the presence of the opposition highlighted the government achievement report, and that these reports were going unnoticed, his eminence considered this a vivid explanation for the opposition's performance evaluation of the government.