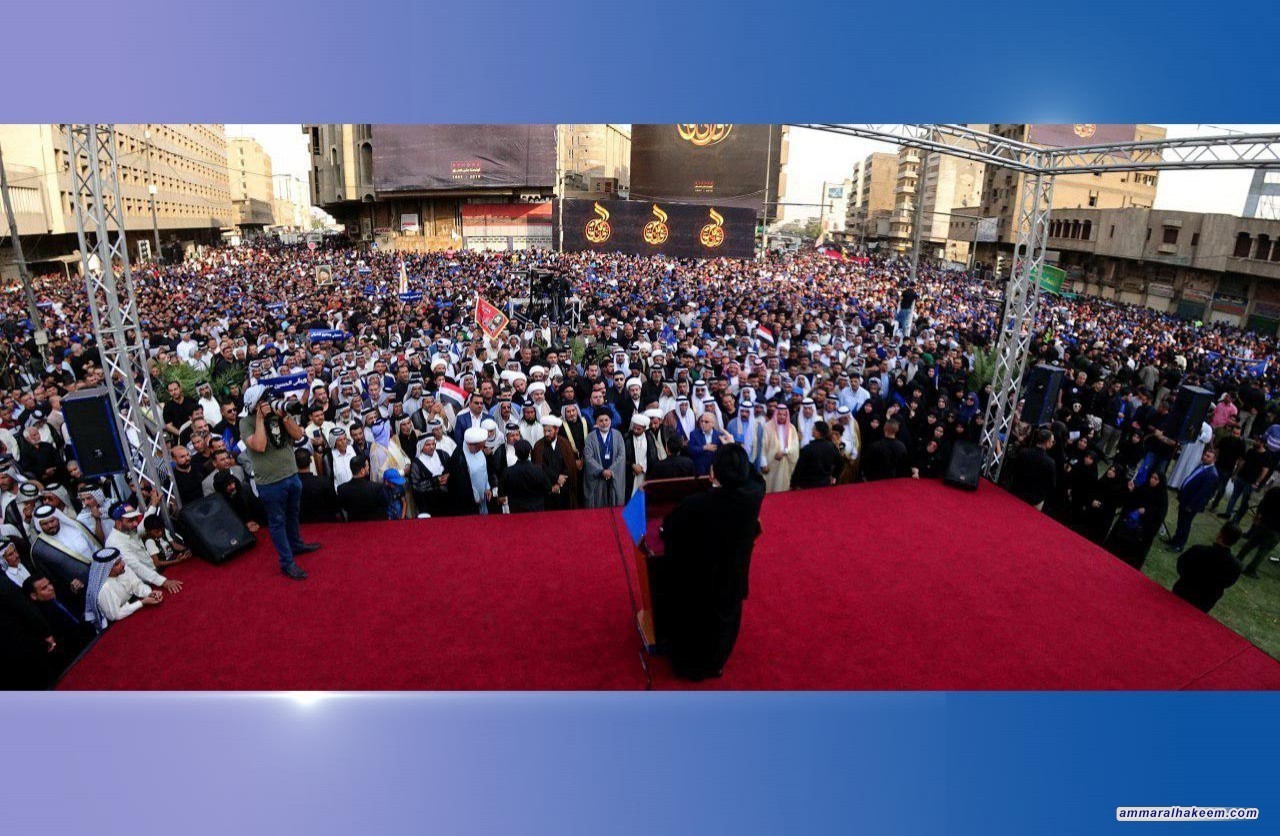 Sayyid Ammar al-Hakim: The soil of Iraq is not an armory for any non-Iraqi weapons and Iraq skies are not a scene for any external attack

Head of the Al-Hikma National Movement, Sayyid Ammar al-Hakim, addressed a rally of people marking the First of Muharam, 30/08/2018, at the Al-Khulani square, Baghdad. His eminence expressed his rejection to make the soil of Iraq an armory for non-Iraqi weapons and or make the skies of Iraq a scene for any external attack, stressed that all powers including political and social actors should stand together to defend the country and put internal disputes aside, and added:" while we register our objection regarding the governmental and official steps taken to respond to the situation in a clear and responsible manner, we stand for the state, we are an opposition to the government not an opposition to the state", his eminence relayed on the awareness and wisdom of the people to make agitators miss the opportunity of undermining people unity and solidarity to rebuild the state, and addressed the people of Iraq:"Do not allow re-emergence of division and rivalry between our lines, and do not allow sectarian trumpet blowers from passing without accountability."

His eminence called for unity and fighting challenges with solidarity, and indicated that construction and change can not be achieved while shovels of demolition are present and ongoing, pointed out that the investigations and confirmed information indicate external targeting of headquarters of the Popular Mobilization Forces requires all of our finest national forces to stand bravely and firmly with the state to maintain its prestige, sovereignty and protect Its decision in diagnosing and resolving the problem, stressed that this never contradict with standing together in preventing any attempt to target the Popular Mobilization Forces or undermine its dignity and its national role, reminded that the Popular Mobilization Forces is a class of the military establishment and targeting them means targeting the security and sovereignty of Iraq, and added:"We will not allow any attempt to undermine this sacrificing and faithful establishment of this land, which has offered the blood of our youth during the darkest circumstances and the most difficult missions ", stressed that the strength of the Popular Mobilization Forces lies in its discipline within the official military system and the unity of its decision and leadership, the most prominent danger facing the Popular Mobilization Forces is being out of the law, and warned of attempts aiming to drag Iraq to become a battleground, rather being a center for stability, and addressed them by saying"Iraq will rush towards achieving its national interests, sovereignty, strength and pride of its people and will not fight senseless wars", indicated that Iraq is greater and smarter and will respond back twice as hard, who ever they are, Israel and its supporters. His eminence reiterated his rejection to the policy of sanctions and starvation of people similar to what Iranian people are exposed to, and welcomed any American-Iranian rapprochement that end the current situation and spare the region consequences of escalation. His eminence indicated that since Al-Hikma National Movement announcement of choosing national opposition, the movement was subjected to various types of pressure, ready-made charges and cheap methods of lying and deception, and pointed out that despite the cruelty of the attack and the misleading misinformation, it did not impair the determination and steadfastness of the sons of the Al-Hikma National Movement to move strongly forward in their project towards the complete reform of the entire political process without exception of any individual, government, system or special considerations created by the circumstances of 2003, and added by saying:""We have no red lines but the interest of our people and the sovereignty and dignity of Iraq",

and addressed hesitants, skepticals and oblivious people and who took pride in sin and corruption, that "the Al-Hikma Movement is moving towards reform and opposition to failure and corruption and change the reality and suffering, and will not yield to bargaining or threatening or discrediting no matter the cost, our actions speek our words, and our history is a witness", and stressed that the Al-Hikma Movement will not compliment and will not back down and will not hesitate in stating of facts as they are, the season of political consensus at the expense of public interest has gone irreversibility, and there is no place for the incompetent, the corrupt and the failed. And called for confronting the imbalance and weakness, on level in the political system or in the political administration, and evoke the successful experiences and development of performance, pointed out:"If the problem in corruption and what supporting consensus and private interests, so let us unveil the curtain and remove the masks of deception by being open to the people and prosecute the violators", and vowed not to allow the series of failure production, called the representatives of the Al-Hikma Movement in provincial councils and state institutions assuming executive or legislative positions to present their duty of service, good performance and disclose everything that has hindered their reform project, or else "we will consider them partners in failure and we will not tolerate or compliment anyone".

His eminence pointed the imminent end of the first year of the government, and services are still under acceptance, corruption bursts in the body of the state and bureaucracy remain existing, the private sector is idle, and education is not fulfilled, wondered "O government, where are the promises you made ?! Pointed out that the Al-Hikma Movement followed up the government program and announced report with great professionalism, and diagnosed unbalance, shortage and weakness, and handled with the results with great caution and responsibility, and continues to monitor government performance and the resulting new reports on completion and progress rates for the second half of the first year of the government tenure, the Al-Hikma Movement position will be clear based on announced results, if the results conforms to what the government committed itself to, the Al-Hikma will be the first supporters despite of of being an opposition, otherwise the Al-Hikma will have a decisive and firm stand and will not tolerate repeated failure, it is a clear message need no interpretation.

His eminence indicated that the Al-Hikma opposition has started to form the National Opposition Front, which will take upon itself announcing the first shadow government to diagnose and propose appropriate alternatives for solutions, and added, "We are not an opposition of words, but our opposition will produce political actions that will correct the path according to the interests of our people, we shall create alternatives and opinions and not lean to more years of corruption and failure ", and reminded of existing systems and laws that are hampering, obstructive, and failures and corruption that do not need evidence or commissions of inquiry, there are clear deficiencies, and sometimes deliberate acts of omissions in service and accountibility systems, and in state control over weapons, and explained the existence of a delay and a clear deficit in how to eliminate the manifestations of unemployment and address the economy of the state, pointed out that "All this and other is a norm of the political performance and will be diagnosed through alternative and realistic tackling and not through dreamy slogans and hopes."