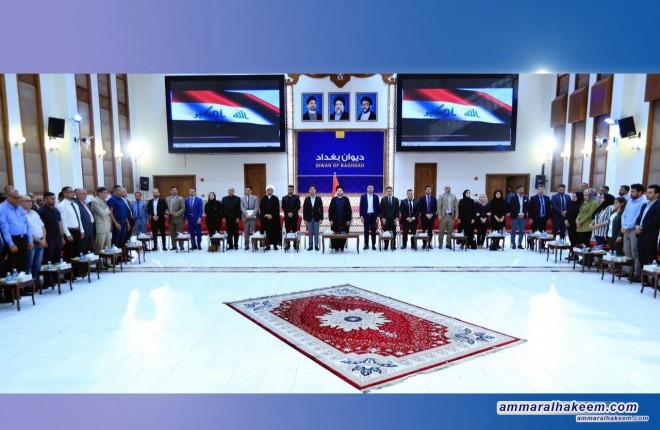 Head of the Al-Hikma National Movement, Sayyid Ammar al-Hakim, at Dewan Baghdad for elites and youth leaders in his office in Baghdad Saturday 21/8/2019, emphasized that Al-Hikma Movement interaction with youth was not a form of formality, but out of a belief in youth energies and competencies, indicated presenting a number of successful young leaders, and pointed that betting on youth was not a phased motto, but a work approach through empowering them and believing in their abilities, despite the blame and warnings of many political forces, and called doing justice to the free lecturers and to guarantee their rights in the upcoming budget plan.
His eminence stressed that Al-Hikma Movement worked on integration between generations, Al-Hikma Movement characteristic is the characteristic of youth, and the presence of people who have accumulated experience, pointed to the youth nature of Iraqi society, which requires providing support, empowerment and investment of youth, called on youth to grab their rights and address issues and not fearing from targeting, warned of negative interaction with achievements and promotion of rumors.
His eminence explained that the political system in Iraq is a parliamentary system, and political action is not a means, youth should be engaged in political work and take their place according to what they see closer to their visions and ideas, urged to participate in the elections and choose the most efficient to change the reality, warned of boycott calls and goals of its advocates who call for a boycott while taking out their supporters to participate.

His eminence pointed that the Al-Hikma Movement opposition was decided after diagnosing the reality and the equation that produced the government, indicated that Al-Hikma Movement will not bear the responsibility of a government that Al-Hikma Movement is not partner in its decision and pro-government is to bear the responsibility of the government, indicated that the Al-Hikma Movement succeeded in being the initiative to create the state of pro-government and opposition and ending consensus democracy, and added:"Our opposition is aimed at the government, not to the regime, it is constitutional and political, has legal cover and we have reached advanced steps in forming the Opposition Front and the shadow government," his eminence expressed his surprise at ignoring the issues of free lecturers and called for doing justice to the free lecturers and to guarantee their rights in the upcoming budget plan.
Regarding the special grades, his eminence stated, "We need criteria in the selection of special grades and preference on the basis of competence and experience, regardless of whom applied for it an independent or a politician," indicated that the solution of unemployment crisis is by steering the economy, exiting the rentier state and obliging foreign companies to employ Iraqi labor and improve the culture of work.