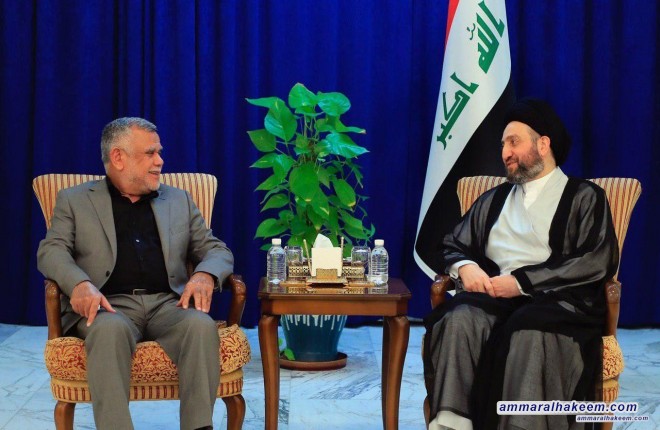 Head of the Al-Hikma National Movement, Sayyid Ammar al-Hakim, received the head of the Al-Fatih Alliance, Mr. Hadi al-Amiri Thursday 24/10/2019
His eminence with Amiri discussed latest developments in the political files in Iraq, particularly the demonstrations and demands that are urgently needed, stressed the importance responding to the demands of the demonstrators with regard to jobs and services.
His eminence stressed the need to handle these demands with extraordinary measures away from red tape and bureaucracy, indicated the importance of prioritizing demands according to importance, and stressed the need to take larger and wider steps in the fight against corruption and relentlessly defeat heads of corruption and turn them to the courts to receive their punishment and dealing with cases in a neutral and transparent manner.
With regard to political powers, his eminence called on everyone to invest the opportunity to get rid of quotas and go towards a reshuffle practice based on efficiency, integrity and experience.
Regarding for the Council of Representatives, his eminence indicated that the Religious Authority was clear when made the Council of Representatives and major blocs accountable for reform and improving the political reality, demanded the Council of Representatives to cooperate with the executive authority to achieve the demands of the public.
Regarding the demonstrations, his eminence stressed on its peacefulness and its specific objectives and to comply to the desire of the demonstrators in order keep the demonstrations out of politicization, and called on the security services to protect the demonstrators from infiltrators and phishing expeditions.