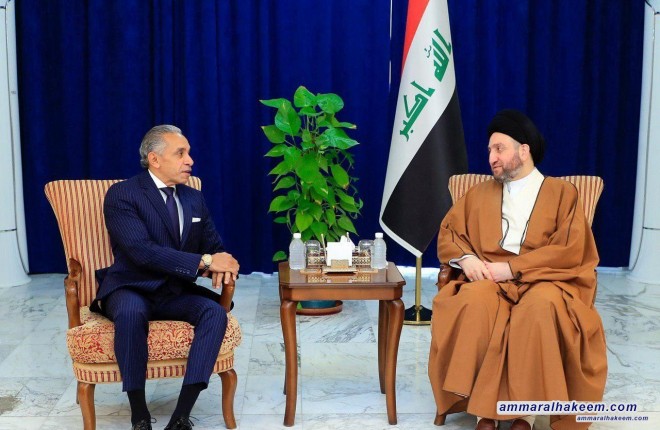 Head of the Al-Hikma National Movement, Sayyid Ammar al-Hakim, in his office in Baghdad received the Egyptian Ambassador in Baghdad, HE Alaa Mousa Monday 18/11/2019
His eminence with Mousa discussed Iraq's relations with the Arab Republic of Egypt, and reviewing the political scene in Iraq and the region.
His eminence stressed the importance of the relationship between Baghdad and Cairo for the benefit of both countries and the stability of the region by virtue of civilization depth of the two countries and positive influence in the region, as well as common interests and points of convergence between the two countries, indicated that the demonstrations witnessed in Iraq nowadays is part of the democratic scene in the country after 2003, stressed the importance of responding to demands according to priorities and responsibilities, whether it is the responsibility of the government, the parliament or the judiciary system.
With regard to the situation of the region, his eminence pointed to the importance of dialogues to avoid differences, and considered the security of the region is under the responsibility of all.