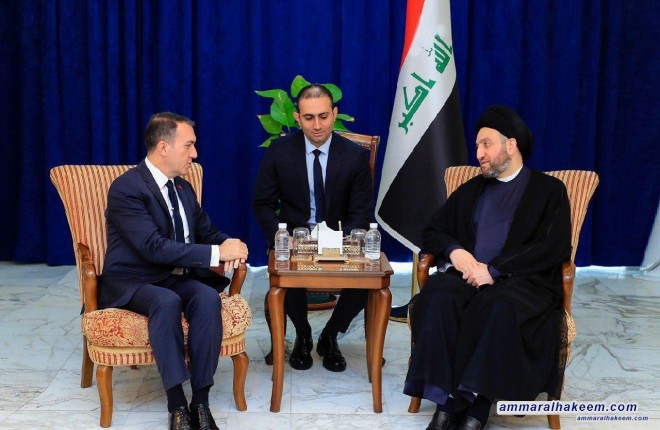 Head of the Al-Hikma National Movement, Sayyid Ammar al-Hakim, in his office in Baghdad, received Turkish Ambassador, HE Fatih Yildiz Thursday 21/11/2019
His eminence with Yildiz discussed developments in the political situation in Iraq and the region and bilateral relations of the two neighboring countries and ways of enhancing them in all fields, and demonstrations in the country.
His eminence stressed the importance of investing public pressure to reform the general situation in the country, stressed the need to restore confidence of the Iraqi public through seriousness and without procrastination to answer the demands of peaceful demonstrators demanding reform and accountability of big corrupt individuals.
His eminence renewed calling for public trials of heads of corruption and the returning money to the state treasury, called on the political forces to abide by the reform document signed by them. The three state presidencies are to invest this opportunity and work to carry out points mentioned in the document within the specified time period.
The Turkish ambassador expressed his country's support for Iraq and its desire to strengthen relations and expand cooperation between the two countries to serve common interests.