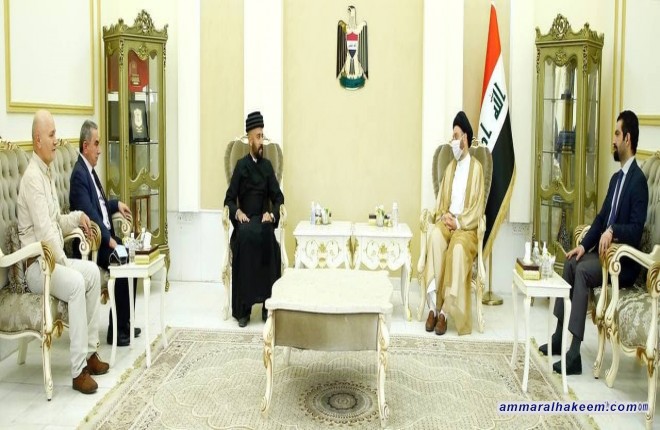 Sayyid Ammar Al-Hakeem, head of the Iraqis Coalition, received a delegation from the ancient Eastern Church headed by Father Simon Younes, in his office in Baghdad on Tuesday, March 30, 2021, and praised the historical relationship that linked us to the men of this church since the reference of Imam Sayyid Muhsin Al-Hakeem “May Allah Sanctify His Soul”, indicating that all components contribute to the creation of Iraq’s bright bouquet.
His Eminence also addressed the developments of the political and social status and the reality of Christians in Iraq and the East in general, calling on Christians to voluntarily return to their country and contribute to the service of its people.
While he stressed the importance of managing diversity in Iraq and everyone's adherence to their own identity without giving precedence or preference to any over the unifying national identity which is the umbrella under which everyone shelters, considering diversity is a source of enrichment for the social and cultural reality in the country.