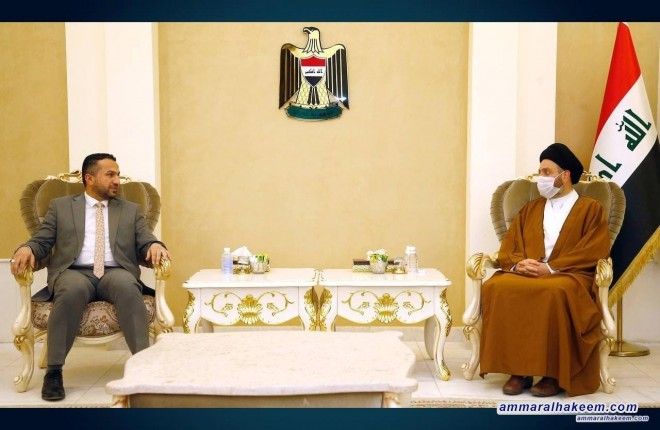 Sayyid Ammar Al-Hakeem, head of the Iraqis Alliance, met with members of the Board of Trustees of the Iraqi Media Network in his office in Baghdad on Wednesday, March 31, 2021, and congratulated them for the confidence of the House of Representatives, indicating that the Iraqi Media Network is the front of the Iraqi state in marketing the national project, by spreading positivity and clarifying the truth of reality. The network has a role in restoring confidence in the political system, promoting national identity and love for Iraq.
His Eminence said in his speech that the success of the Board of Trustees in its mission is a success for the youth project and their empowerment, referring to the visit of His Holiness the Pope and how it contributed to conveying a positive image of Iraq globally.
His Eminence urged the network to deal paternally with the Iraqi media, calling for the adoption of a comprehensive project with all satellite channels and local media to focus on the national project and national identity and to contribute to the making of a public opinion that supports this trend, stressing that drama has a great role that may dispense with education and publicizing a case or warning against it, calling to ease up the administrative routine in the network and simplifying the procedures because the media is fast and up-to-date and does not work well with traditional procedures
H.E. also called for the establishment of an Iraqi channel that would be a window into the Arab, regional and international surroundings, like other countries, which requires thinking outside the context such as sponsoring programs and searching for sources of funding outside official frameworks and oversight by the concerned authorities and building an integrated media city.
H.E. stressed the need to preserve the unbiasedness of the Iraqi media network, grant equal opportunities to all, especially during the elections, spread the spirit of interacting and taking part in the elections, calling for support of national projects capable of making the change, calling for a focus on the societal need for the national project.