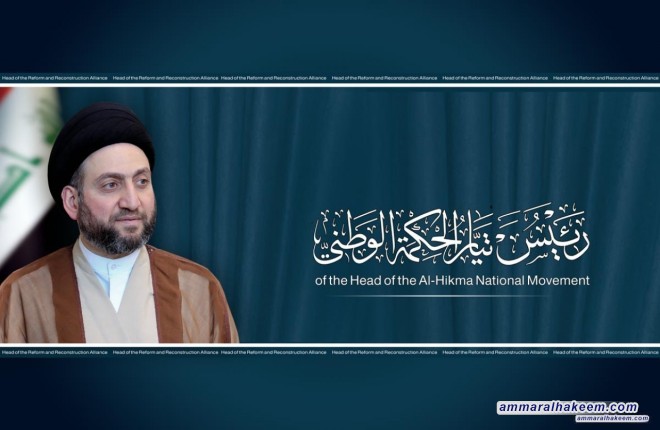 Sayyid Ammar Al-Hakeem, head of the Iraqis Coalition, said in an interview with the Egyptian newspaper Al-Ahram - April 1, 2021, that the demonstrators exercised their guaranteed constitutional right through large popular protests marred by a series of unfortunate events, so many martyrs fell from among the protesters and of the security forces, indicating that the dominant feature of (October) Tishreen movement is a sincere youth national effort that was able to stir stagnant waters and create change from within the political system, expressing his admiration for the political awareness created by the movement among the youth, through which Iraq was able to regain its youth, which has become interactive with its political system, reform it and develop it.
Sayyid Ammar Al-Hakeem indicated that the October’s people achieved what pens and electoral votes were unable to achieve, and they achieved a change that would not have been possible without their sacrifices and the blood of the martyrs, despite all attempts by some to drag the protests into clashes or political recruitment. H.E. renewed his invite to make preparations for the early general elections to keep their promises to the martyrs by stepping in the political system resolutions and to improve them from within. Adding, "We want nothing for this peaceful and conscious group but more influence and presence in the political scene."
His Eminence noted his call for a direct dialogue between the Power of Tishreen (October) and its impact, and the political Powers, because the presence of the two parties is a fate that cannot be overlooked, recalling his rejection of violence in dealing with the demonstrations since it started or describing them as spies and accusing them with treason. H.E. indicated that Al-Hikma National Movement had preceded the Tishreen movement by three months and came out with a demonstration that called for reform, combating corruption, and providing job opportunities in most of the country's provinces.