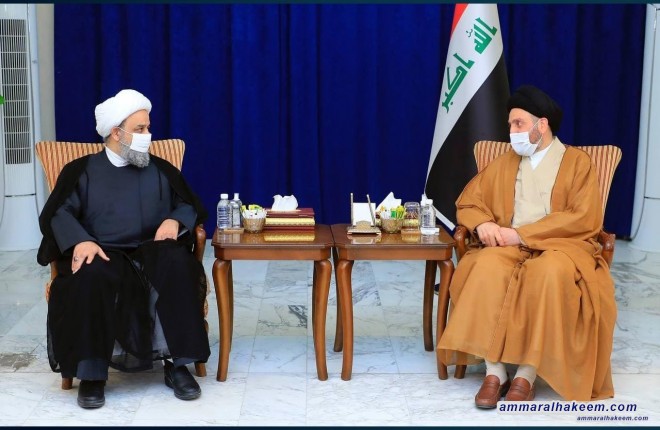 Sayyid Ammar al-Hakim, head of the Iraqi coalition, met in his office in Baghdad, Sunday 11/4/2021, the Secretary-General of the World Forum for Proximity of Islamic Schools of Thought (WFPIST) Hojat-ol-Islam Sheikh Hamid Shahriari during his visit to Iraq, and exchanged views with him on the current issues and challenges facing Islamic unity and Islamic nations in general. We listened to His Eminence vision of sustaining dialogue between Islamic sects. Sayyid Ammar Al-Hakeem highlighted the importance of addressing the extremist discourse, searching for common interests, and glorifying it, limiting what has a disagreement over it, stating that the nation’s scholars of all sects must bear the burden of protecting the nation from deviations and sustaining a culture of coexistence among all. His Eminence emphasized what he had previously proposed about managing diversity in societies that witness religious, sectarian, and national diversity, adding that diversity is a source of enrichment for societies. His Eminence also indicated the nature of Iraqi society and how it overcame sectarian conflict in record time when it was on the verge of plunging into sectarian conflict, pointing out the results of his visit to Anbar and his call to its scholars to take the initiative in adopting joint projects and united in all aspects.