Fifth Ramadan Lecture: Sayyid Ammar Al-Hakeem On One of The Implications of Humiliation of Oppressors; Heart Cruelty, Deviation from Sound Judgment 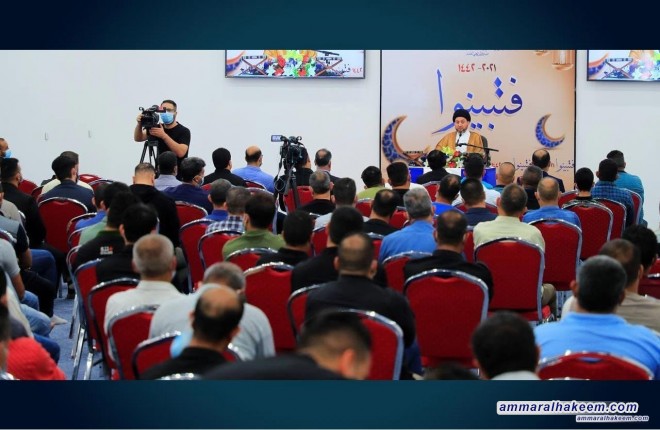 Sayyid Ammar al-Hakim, head of the National Wisdom Movement In the fifth Ramadan lecture, Wednesday 21/4/2021, continued his speech in the message of rights to Imam Zain Al-Abidin Ali Bin Al-Hussein (Peace Be Upon Them) which is the right of the hand and in its metaphorical meaning, including the implications of the hand from good or bad deeds, and one of its clearest applications is injustice, reviewing its Holy Quranic testament, as it ended with the twelfth testament, which is sin, as it represents a kind of injustice, and added fourteen Quranic implication of the consequences of sin.
His Eminence said that humiliation is the fifteenth of these implications, while he indicated that the sixteenth implication of sin is the delusion and deviation of the sinner, and other effects of disobedience are divine torment, as well as fleeing from the battle in jihad and the characterization of the guilty of corruption and his daring to kill and take away innocent lives.
His Eminence stated that among the consequences of sin and disobedience is the cruelty of the heart and deviating themselves from sound judgment and righteousness, in addition to the deprivation of paradise loss of its promise. And will not attain thrive or success in his life. The disobedient also deprives himself of prosperity and well-being, sadness accompanies him, lack of reassurance as well as depriving him of intercession, while the persistence in disobedience and daring against Allah ends with deformation and transforming the sinner into a story of consideration for those who are deep into their sins.