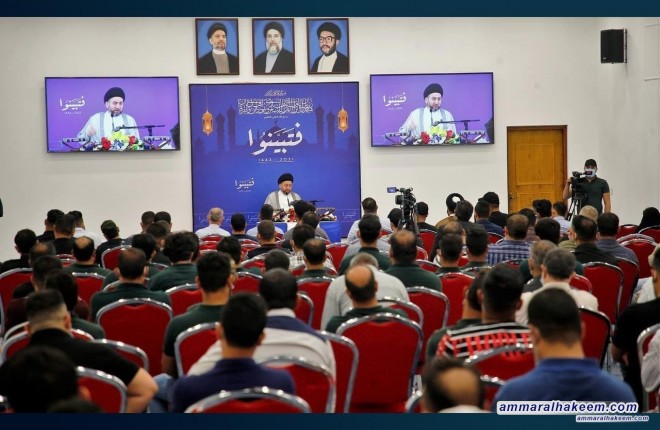 In the seventh Ramadan Lecture on Sunday 25/4/2021 Sayyid Ammar Al-Hakeem, head of Al-Hikma National Movement, explained asking for luxury and thankless prosperity is one of the motives for sinning according to the Qur’anic Examples on what the old nations collapsed when asking for unwelcomed prosperity and luxury, drawing attention to the silence of scholars and not taking the good community guidance initiative as the authoritarian behavior always leads to sinning. Adding “a person might sin unintentionally and as soon as he remembers the Words of Allah he rushes to abandon sinning. The unintentionally sinning is not the same as sinning willingly, intentionally and premeditated even with the remembrance of Allah’s Words. Considering that a person’s soul might enjoy sin unless it’s a gift from Allah, as for a person to always follow his soul’s needs he would’ve sinned and trespassed and wronged himself. Recalling a warning from holy Qur’an on bad company, In the name of Allah Most Merciful Most Gracious “And we used to enter into vain discourse with those who engaged [in it],” now the sinner, only sinned for he was following a friend and a companion without knowing his values, religious and principles so he fell into sinning with and entered the vain discourse. As for the implication on leaving one’s sins, His Eminence said, “Allah mercy will come to anyone who worship him, we find that it’s an inverse relation between the Mercy of Allah and sinning. In addition to mercy, Allah will gift sound judgment, comfort and the expansion of livelihood in mysterious ways”. His Eminence referred to the thirteenth testament of injustice, asking for this worldly-life, and its implications are disagreement, conflict, obscenity, rebound from beliefs and religion, rejection of the hereafter, Slandering the Messenger of Allah “Peace Be Upon Him” and abandoning the gatherings of the poor to the gatherings of the rich saying that it brings no personal value in the gatherings of the poor.