Sayyid Ammar Al-Hakeem: Those Immersed In The Worldly Life are Out of Breath from Running, Will Not Stop 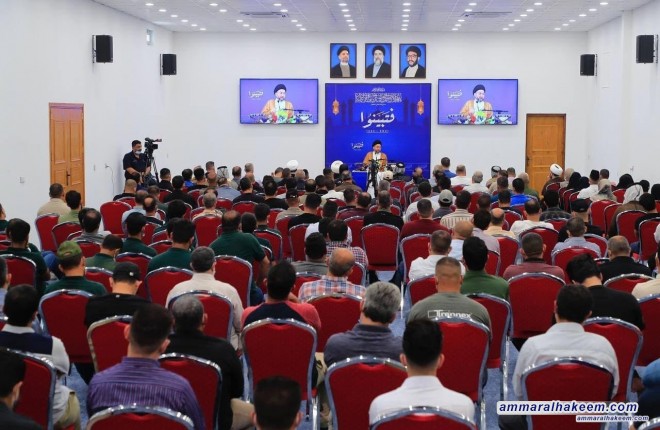 Sayyid Ammar Al-Hakeem, head of the National Wisdom Movement, in the ninth Ramadan lecture, Tuesday 4/27/2021, continued his speech in the message of rights for Imam Zain Al-Abidin Ali Bin Al-Hussein "Peace Be Upon Them". On the Injustice Testaments while citing Qur’anic verses. He said that the children of Israel and the Jews are a testament of those immersed in the world and forgetting the Hereafter, just as the infidels are another testament of those immersed in worldly life. Their love of this life is one of their reason to become an infidel and holding on to it and not taking the words of prophets. His Eminence indicated that the sinners are the fourth testament of the testaments of immersion in worldly life. Yet here it must be noted that a person must be a part of the worldly life, and that is the opposite of immersion in it and its primacy over the hereafter and forgetting about it. In addition, among the testaments of those who are immersed in the world and the hypocrites and tyrants who are far from Allah Almighty as well as those who prefer this worldly life to the hereafter, the heedless who are taken by neglect, immerse themselves in this world, and forget the hereafter. His Eminence said, "Also among those who are immersed in the world who deny the revelations of Allah because they mention the hereafter, so you see them denying the verses of Allah while deep inside them they know that it is the rightful truth from Allah Almighty. The Holy Qur'an describes those who are immersed in worldly life are out of breath from running towards it and they won't stop running, similarly, for example, the dog if you work it or let it be, remains out of breath. The people who love the worldly life are always gossiping and thinking ill of people." His Eminence moved on to the fourteenth testament of injustice, which is the cruelty of the heart and offset by reverence and softness. Among the effects of the cruelty of the heart in the Holy Qur’an are the deliberate misinterpretation of the divine books, not standing with what is right, pleasure in tormenting people and hearing their agony, abandoning supplication, and making sins look better than their ugly truth and negligence.