Sayyid Ammar Al-Hakeem: It isn’t Possible to differentiate between true belief and Sound Behavior, The Latter Must Reflect The First 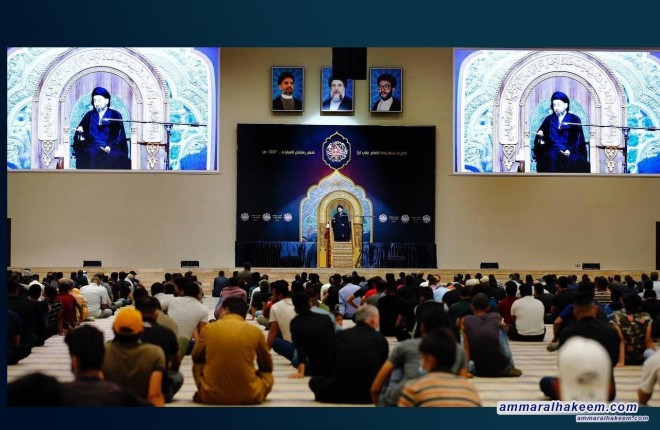 Sayyid Ammar Al-Hakeem, head of Al-Hikma National Movement, mentioned in the second lecture on the occasion of the martyrdom of Ameer Al-Mou’mineen (the Commander of the Faithful) Ali bin Abi Talib “PBUH” on Monday 3/5/2021, his interest in building a righteous society according to specific characteristics and features, indicating the importance of the coherence of the correct belief to sound behavior. Beliefs represent the theoretical structure of the righteous person, while behavior represents the practical aspect. The true belief is insuperable from sound behavior, for they are elements that complement each other. His Eminence said "The characteristics of the righteous individual and the righteous group according to the vision of Imam Ali “PBUH” are in four sections, the first of which are the qualities and characteristics of the members of society, the second are the characteristics and features of the forefront of state and the responsible in the good society, the third of which are the tasks entrusted to the forefront towards the members of society and the fourth the obligations of the individual and society members towards the forefront and the responsible.” The need for a righteous community to have common characteristics and features among all its members regardless of status and location. The first of these common characteristics is piety, as it is a barrier that prevents a person from slipping into disobedience, while the example of previous nations news is a basic material for this characteristic and features, explaining the vision of Imam Ali “PBUH” on Piety, describing it as the key to repaying the individual and his ammunition for the enemies and freeing him from every sin that makes him a captive of Satan and spares him from all destruction, and by which one attains desires. His Eminence indicated that piety has two direct and indirect effects, for it is the freedom and immunity of the individual, provided that he is a good worshipper of Allah Almighty. There is individual worship and other societal worship, and the first leads to the second when a person is biased towards his interests and whims at the expense of the public good and the righteous society, in addition to the piety of the forefront of the state is noted by reminding In the Hereafter and standing in front of Allah “may He be glorified and exalted”, and with the demise of the world, titles and posts, and a reminder of the need to take the simple things from the world, indicating that the second common characteristic in the righteous community between the individual and the righteous society is the characteristic of asceticism and the shortening of hope. Ameer Al-Mou’mineen warns of long hope, which is different from hope. The latter is legitimate, while the former is destructive to the righteous individual and the righteous community, detailing the qualities of the ascetic by saying a lot of thanks to Allah Almighty, and thanksgiving may be verbal or practical when a righteous person improves the use of his grace, abstains from sins, and always remembers the volatility of the world and its impermanence.