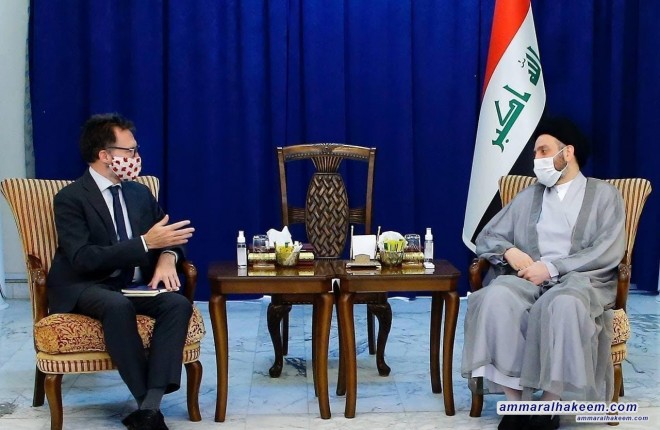 Sayyid Ammar Al-Hakeem, head of Al-Hikma National Movement, received at his office in Baghdad on Wednesday may 5th the Canadian Ambassador to Iraq, His Excellency Ulric Shannon, and exchanged views with him on developments in the political scene in Iraq and the region. His Eminence stressed the importance of developing bilateral relations between the two countries on all political, economic and cultural levels, and said that Iraq is open to everyone based on common interests and preserving Iraqi sovereignty. His Eminence indicated that Iraq is on the verge of early elections, adding that “these are crucial elections that can determine the fate of the political reality for the next decade,” stressing that they be held on time and create all appropriate conditions for honest competition between the blocs in front of the Iraqi voter. His Eminence affirmed that Iraq seeks to play the role of mediation and to be a bridge for communication between the factions of the region, and that any rapprochement and any solution to the problems of the region will serve the interest of Iraq, the region and the world, as the security and stability of the Middle East is part of the world’s security. His Eminence wished His Excellency the Canadian Ambassador a pleasant stay and success in his diplomatic mission, appreciating supporting Iraq in confronting terrorism and overcoming crises.