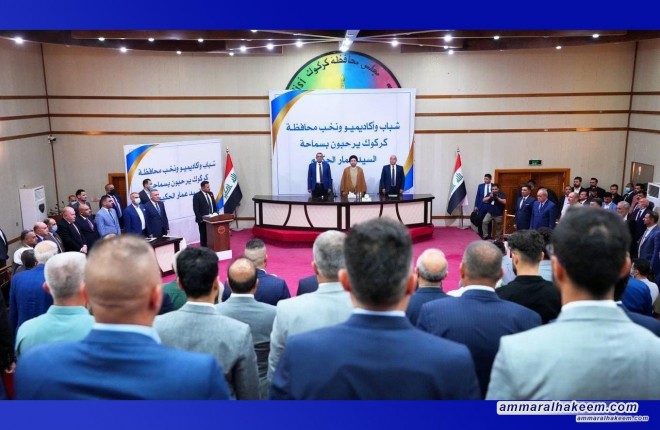 Sayyid Ammar Al-Hakeem, head of the National State Powers Alliance, expressed his rejoice to meet the elites, competencies, and youth leaders in Kirkuk while exchanging with them the views on the Iraqi reality and the role of elites and competencies at this phase Friday, June 4, 2021.
His Eminence stressed the importance of defining the philosophy of the political system in Iraq, noting that there is a contradiction in more than one place, as the constitution speaks of a new philosophy, while thousands of legislation, instructions, and decisions still obligate state institutions to the previous course of work that was in force in the era of dictatorship.
His Eminence noted the importance of addressing the cultural reality in Iraq, as most of the problems stem from cultural and intellectual aspects, which requires social maturity to confront them.
His Eminence called for considering Kirkuk the capital of diversity and stated the necessity of legislating laws that support this trend, as well as establishing a global center for dialogue that would take care of the dialogue of Iraqis with each other and the dialogue of Iraqis with the world, holding the elites their responsibilities in drawing society towards them and highlighting the positives achievements that were achieved and stepping away from the language of negative generalization.
His Eminence considered the success in Kirkuk a success throughout Iraq with unity of ranks and social cohesion, pointing to the existence of a will for the stability of Iraq, citing the Pope’s visit, which was a message of love and peace and an expression of the positive roles Iraq plays at this phase through the dialogues it hosts between the factions in the region, stressing that early elections put Iraq At a crossroads, either stability, and taking-off towards the better or the continuation of suffering, and this depends on the outcomes of the elections by launching the reassuring equation.