Sayyid Ammar Al-Hakeem, head of the National State Powers Alliance, received Mr. Ammar Jebur, the governor of Saladin in his office in Baghdad on Monday, June 7, 2021. 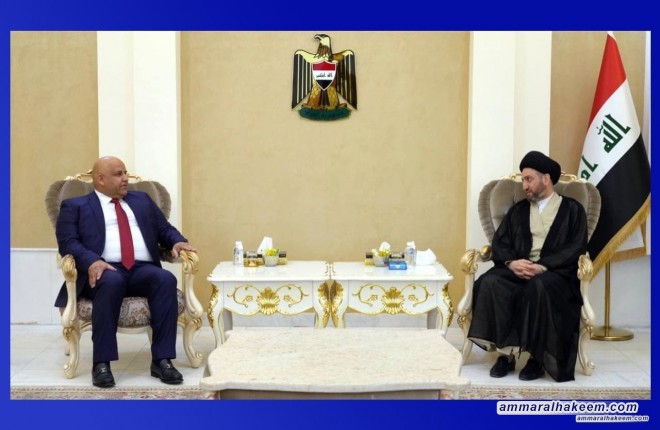 His Eminence listened to a detailed explanation about the service reality of Saladin Province and the challenges facing the local government, where he stressed the need to advance the service reality and rebuild what the terrorist gang ISIS Destroyed. Stressing the delivery of services to all districts and sub-districts.
His Eminence stated that Saladin is a vast Province, and its districts, sub-districts, and rural areas must have service departments that relieve pressure on the central-local government and relief the citizens of the travel efforts. Calling to take good care of the capital of Islamic Civilization, Samarra, and prepare all the requirements to mark this city on the map alongside its holy shrines.
Concerning security, His Eminence stressed the importance of reducing the political scramble in the province due to its repercussions on the security and service reality. While calling to unite the ranks, spread the language of moderation, prepare for early general elections through providing all the requirements and conditions. His Eminence followed up with the governor the demands of the citizens presented to His Eminence in his recent visit to Amerli and Tuz Khurmatu.