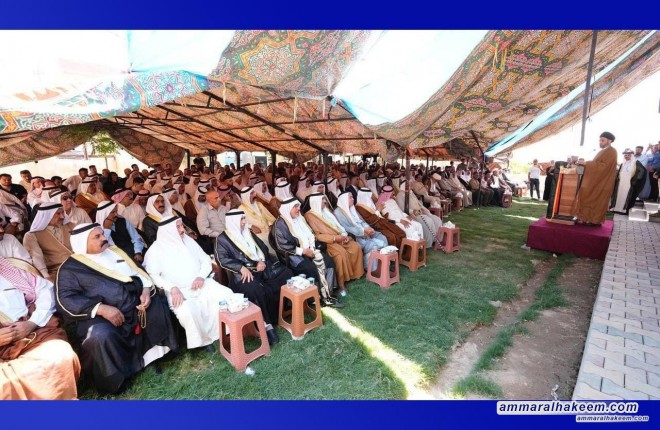 Sayyid Ammar al-Hakim, head of the National State Powers Alliance, during his visit to Tal Afar district as part of his tour of Nineveh Governorate, today, Saturday, June 3, 2021, renewed his support of considering Tal Afar a province because it has all the geographical, administrative and demographic components and the need to discuss this case away from political strife.

His Eminence praised the patience and steadfastness of the region and its people, noting that the targeting was great for the importance of Tal Afar with its history, stance, and roles in the Twentieth Revolution and other historical events, recalling the ways used by terrorism in striking this steadfast city once by dispersing its people and again by targeting it directly, renewing the covenant with Tal Afar to remain Supportive and embracing its causes, and Tal Afar will remain in our eyes as it was historically.

His Eminence explained that Tal Afar has proven that the will of the people is stronger than tyrants and tyrannical or intrusive projects, and that building Iraq is by building its cities, including the city of Tal Afar, calling to look at the past to reconsider and not repeat the mistakes and to take look into reality and look forward to the future and build them in line with the aspirations of the people of Tal Afar.

H.E. stressed the adoption of the principle of deducting crises and making sure that no one can cancel the other, no matter how strong they were at some point, and we cited history’s challenges that faced Iraqis including the people of Tal Afar.