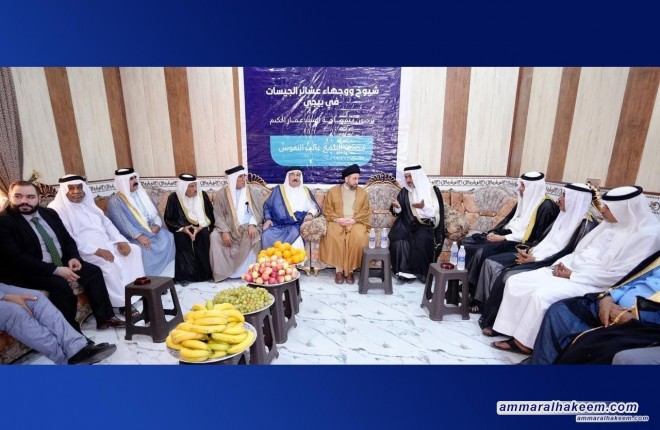 Sayyid Ammar Al-Hakeem, head of the National State Powers Alliance, met a group of sheiks and dignitaries of the tribe, in the guest-place of Al-Jesat tribe, led by Sheikh Ghalib Al-Noufus in the city of Baiji in Saladin Province, on Sunday, July 25, 2021.
His Eminence expressed his rejoice at his visit to Saladin and Baiji city, which is flowing of sacrifices and its people. Calling to join efforts to rebuild it and change its reality after the House of Representatives considered it a stricken city.
His Eminence made it clear that the entry of terrorism and its attempts to impose its approach on the city under slogans claiming its affiliation with Islam, yet Islam is innocent of them, they failed with the steadfastness and solidarity of all Iraqi, stressing that the obscurantist view, violence, and extremism cannot continue in our regions, pointing to the importance of knowing our "value" together against adversity. The Iraqi has nothing but his Iraqi brother, and this is confirmed by experiences after what was confirmed by the terrorist invasion of the provinces and their liberation operations.
His Eminence stressed the need to address the problems that the citizens suffer from in the liberated areas, and the need to end the file of displacement, camps, and the state of congestion, and to stop the depletion of state resources. H.E. explained that there is exploitation to the file of the displaced, and some who live on the continuation of these camps and how the compensation is not being delivered to them directly, indicating that the elections are on the way Everyone should take a stand through broad, effective and conscious participation in the election of representatives from these regions who would defend their rights and follow up on their files without neglecting them.