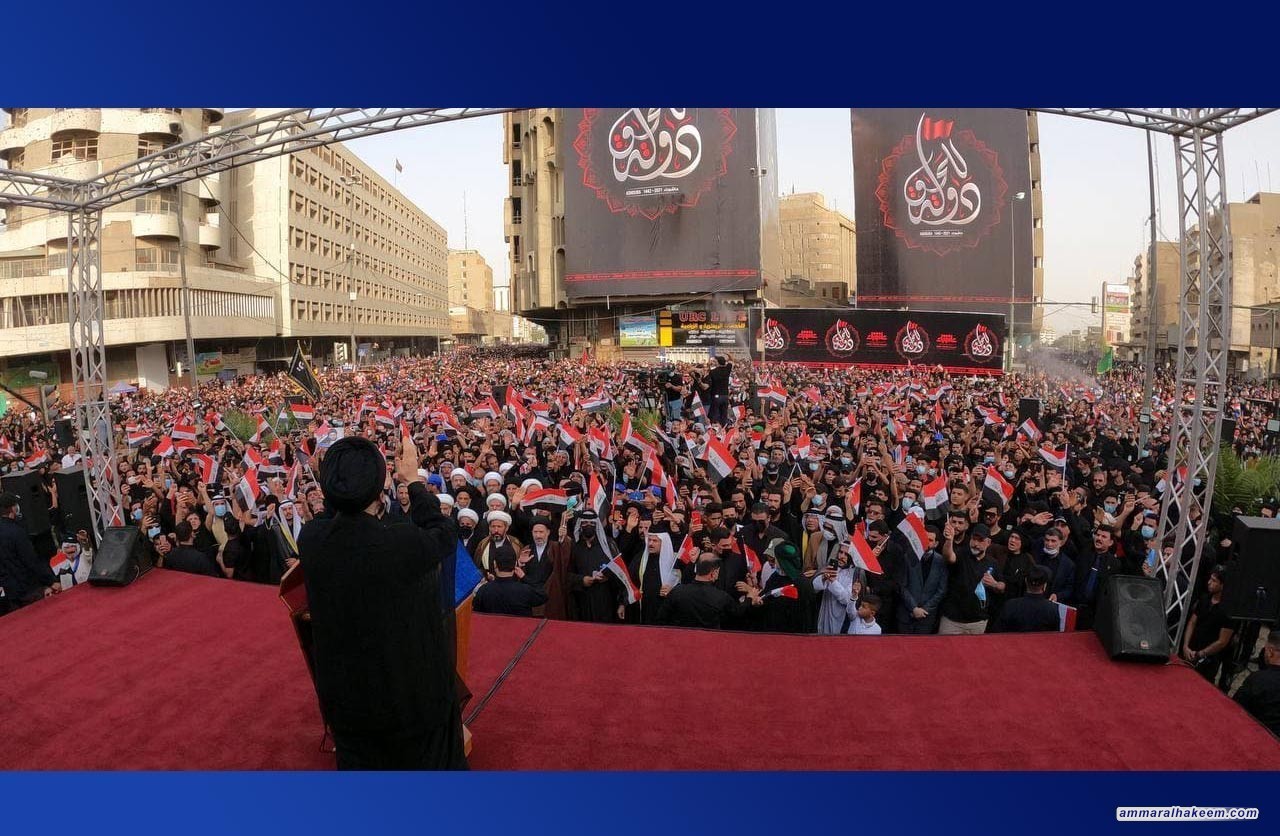 Sayyid Ammar al-Hakim, head of the National State Powers Alliance, called on the Iraqi Hussainis to raise the banners of justice, moderation, and assembly, and to gather around this Mohammadan Alawite Hussaini tent, in solidarity, love, cooperating, fraternal, understanding, and harmony. H.E. reiterated his call for the unity of intentions and thoughts, warning against the collapse of the political system with the survival of consociationalism and the flotation of failure.

His Eminence said, "The Hussaini rites are not for the Shiites alone. Our Sunni brothers and our loved ones from other religions are racing to establish, venerate and respect them, side by side, as an expression of their solidarity, freedom, awareness, and adherence to the concepts of Ashura and the eternal humanitarian Hussaini revolution." H.E. considered the humanitarian Islamic rites and events a grand national opportunity to reunite the ranks, dispelling challenges and inconveniences, and participating in promising and good projects and ideas, for the benefit of our country and our beloved homeland.

His Eminence, in the annual Hussaini gathering in Al-Khilani Square in central Baghdad, called for Iraq to remain a center of moderation and center of moderation and the fulcrum in the Islamic world and a beacon for this coexistence, understanding, and brotherhood. There is no room for sectarianism, fanaticism, and racism. We are Iraqis and we are all Hussainis, and the people of Iraq are the people of peace, civilization, and moderation.

His Eminence in his speech “Our symbols, our leaders, our references, our scholars, and our martyrs are our testament of that, our solidarity testifies for us, as we were, are, and will be for eternity.”

“Our country has been subjected during our modern history to the worst and most heinous internal and external agendas and schemes to dismantle societal cohesion and divide the country geographically, ethnically and doctrinal. Yet our people emerged from all those calamities, tribulations, and tests with heads held high, victorious, triumphant, and confident.” H.E. added.

His Eminence described Iraq by saying, “Our Iraq is the tent of Hussein that unites all identities, orientations, and spectra, and our land is the land of values, principles, and sacrifices. Our Iraqi identity was, is, and will remain independent, united, and genuine, and our wills must be combined, harmonious, and cooperative, to advance our reality and present and preserve our future from the harsh experiences of the past and its lessons.” Indicating that the world is changing, the region is changing, and the conditions are now appropriate to bring about positive change in our Iraq. Calling everyone to invest these conditions so they would reconsider their evaluation of the reality and form a new chapter in life, and urged the renewal of ideas, discourse, methods and tools and to create "together, and with no exceptions, a new atmosphere for a new renaissance, a new state and a promising and prosperous future," recalling that the path of political action is a path paved with the blood of Al-Mujahideen and leaders who sacrificed themselves to save Iraq and its people, from the dictatorship of tyranny, the absurdity of terrorism and the chaos of corruption, and we are still on this path, and will not deviate from it, stressing that we shall be relentless and have no subtleties for the sake of the right and the interests of the Iraqis, recalling his position on the events of October 2019, adding, "We said at the time that the political scene in Iraq suffers from a real blockage, and that we urgently need an effective change that the Iraqi street can feel with its multiple categories." Similarly, Al-Kadhimi’s government was formed to perform two main tasks: restoring the prestige of the state, and holding early elections in a safe and fair environment that enables all Iraqis to choose their representative in a capable government and a strong state.

H.E. stressed that complacency regarding these two tasks, foremost of which is the task of holding early elections, regardless of what concerns may be, the consequences will be dire, and considered the ballot box as the only peaceful solution in carrying out the desired change and reform, and reverting out of that exposes the security of Iraqis, and the future of the state to the unknown and puts us in front of dark probabilities, Allah forbid.

His Eminence called on all the Iraqi national powers, which announced their withdrawal from the elections (most among them the dear brother His Eminence, Sayyid Muqtada Al-Sadr, and the National Youth and civil parties and powers) to reconsider the decision to withdraw and return to active participation in the elections, indicating that the blood that shed in the arenas of the popular movement and protesting the poor services and unemployment, does not deserve to be underestimated and used as a pretext for political blackmail and private gains, explaining that this pure blood that shed from our youth as they shouted their national claims, demanding their most basic rights and wanted a strong state and a capable government that preserves their dignity. The previous electoral representation did not achieve this for them, so they demanded that early elections be held to hold the negligent accountable through the ballot boxes.

Early elections have become a popular demand and must be held on time, indicating that through the elections, everyone in the political arena will know their true size and bear responsibility for failure and negligence so that the people choose who represents their aspirations and achieve their future, a future that befits Iraq and Iraqis. Addressing everyone: Do not close the doors of peaceful change in the face of your people. Patience has limits and whoever has a right will take it, even after a while.

His Eminence made it clear that the political system in Iraq is still subjected to obstacles and hinders that have restricted its growth and development. Political corruption is the most prominent of these obstacles, indicating that political corruption is represented as wasting opportunities and wasting positive constructive energy. Adding: we are not unable nor we lack men nor determination and the will to build, there are many loyal and competent men and women in the land of Mesopotamia. What we suffer from is the lack of courage to bear the responsibility of taking a decision and going through with it.”

H.E. stressed the need to persist and continue to implement the national will. the conditions to build the state are; The state cannot be built without accountability and punishment of those who target the prestige of the state and the rule of law. A capable government cannot be formed without free and fair elections. Services cannot be achieved without holding the negligent and the unsuccessful accountable and blocking their path. The dignity and security of citizens cannot be preserved without arresting criminals and murderers in broad daylight.

His Eminence added “It is not possible to operate factories, flourishing agriculture, and revive the economy without prosecuting the corrupt and public money stealers. What we suffer from is hesitation, lack of decision-making, and responsibility.” He recalled that there are periodic meetings of the presidencies and continuous meetings of the leaders of the political blocs and there are daily meetings of important and sensitive joints in the state, and everyone calls for reform and change, wondering where the defect is then? Why is slow when decision-making? And why is there no firmness in implementation and follow-up? Everyone tries to evade responsibility for failure or error

His Eminence warned against the collapse of the political system if it continued in its consociation language, generalizing failure and not specifying who is responsible. I have informed you, may Allah bear witness.

Al-Hikma National Movement, through its electoral alliance, (the National State Powers Alliance) bears a great national responsibility in facing the obstacles of the political system and working to develop it,” calling for important points, including that the IHEC is making a great effort to conduct early elections. They deserve all our appreciation, pride, support, and attribution. IHEC must announce the results of the elections within 24 hours of the end of the general voting process. The process of announcing the results must be transparent and fair, not tainted with doubt nor suspicion. The second thing is that whatever the results may be, the government must be hastened and formed by the electoral alliance who will also bear the responsibility of implementing the national governmental program, within a clear timeframe that are reviewed at the end of each year,” while the third point was “there must be two movements in support of the state, one of which is the government movement, which starts from the first day of forming the government, and the second is the opposition movement, which takes upon itself the evaluation of the government through the methods and mechanisms of democracy within the law, and it is not possible for everyone to participate so that accounting standards are not floated, there are those who bear the responsibility for implementation and others who bear the responsibility for reform.”

His Eminence stated in the fourth point: “We urgently need a new social and political contract by making constitutional amendments in line with the current Iraqi reality. There are serious discussions about the nature of the appropriate system for Iraq, and whether it is presidential or parliamentary. There are also calls for direct elections for governors, and the secretariat of Baghdad, and reducing the seats in the House of Representatives... and other important constitutional articles that are still suspended and ineffective,” calling for an end to the controversy of accusing our security institutions, most notably the Popular Mobilization, and criminalize anyone who transgresses the prestige of the state and carries weapons outside the state’s law and to stop accusing loyal members of all types of our armed forces, adding We do not want only paper-based government programs, we want real actions and service priorities that are defined by time frames. Health, electricity, education, employment of the unemployed, agriculture, industry, and investment are the most prominent files that must be focused on in the next phase. Our foreign policy cannot be made without full coordination with our internal policy, adding, "We want Relationships that are based on the priorities of our interests. There are unresolved regional files, most notably water, borders, and targeting sovereignty that needs effective diplomatic mechanisms and bold political resolutions.

His Eminence said, "The time has come for us to be a fully sovereign country, with lands free of foreign forces, primarily the American military forces, though we do appreciate the international efforts that stood with Iraq in its war against the forces of terrorism and darkness," expressing his belief that the steps taken by Al-Kadhimi's government towards achieving this goal were confident and successful, and it needs popular and political support to complete and consolidate it. considering that the efforts of the Iraqi government in restoring Iraq’s relations with its surroundings, region, and the world are appreciated efforts, which have made Iraq an arena for regional and international understandings, agreements, and dialogues, and not an arena for destructive conflicts and tension. We were and still support this orientation and for Iraq to remain a key player in linking the interests of the region and the world again, its previous calls for the brothers in the neighboring countries, led by (Iraq, Iran, Saudi Arabia, Turkey, and Egypt) and other countries of the region, at the table of serious dialogue to serve the interests of our peoples in their present and future, indicating that "we are facing an important and a decisive phase in the contemporary history of Iraq." Either we face a strong country and a bold government capable of achieving the aspirations of the Iraqis, or we face an unknown future that exposes everyone to grave dangers.