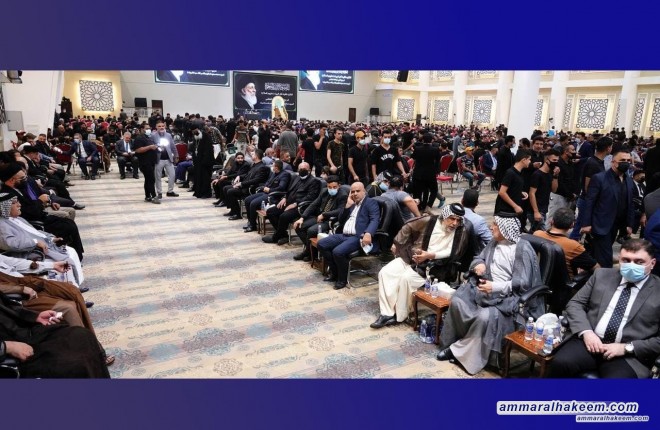 Sayyid Ammar Al-Hakeem, head of the National State Powers Alliance, lauded those who participated and shared and condoled the departure of the great religious authority, Grand Ayatollah Sayyid Mohammed Saeed Al-Hakeem. His Eminence tweeted on September 9, 2021, “With gratitude and expressions of appreciation, we extend to all from Religious Authorities, Religious Scholars, Dignitaries of The Holy Hawza Seminary, Kings, Presidents, Princes, Islamic, Arabic, International, and Global parliaments, and official figures, prominent politicians, clans’ dignitaries, and well-respected scholars, who shared with us our solaces on the great religious authority, His Eminence, Grand Ayatollah Sayyid Mohammed Saeed Al-Hakeem (May Allah Sanctify His Soul) pass away.” adding, “We stand in reverence for the hundreds of thousands of people who buried the immaculate remains of the Great Religious Authority from the Holy City of Karbala and Najaf Al-Ashraf grandly, and held funerals for his pure soul.”