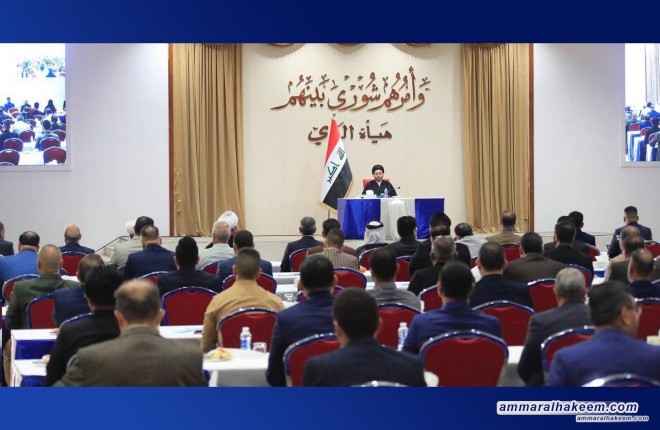 Sayyid Ammar Al-Hakeem, head of Al-Hikma National Movement, exchanged with members of the opinion board in the movement on the developments of the political scene in Iraq and the region and briefly talked about the biography of the late Ahl Al-Bayt Jurist the great religious authority, His Eminence, Grand Ayatollah Sayyid Mohammed Saeed Al-Hakeem “May Allah Sanctify His Soul” and his scholar and jihadists career. His Eminence also renewed his appreciation for the positions of religious authorities, senior officials, princes, sheiks, and dignitaries of the Iraqi clans and the masses of believers mourning the passing of His Eminence.
His Eminence referred to the great positive impact of the Baghdad Conference for Cooperation and Partnership on Iraq's regional and international status, while also indicating that Iraq's interest lies in a stable and secure region.
Concerning the forthcoming elections, His Eminence stressed competition based on programs and present the program of the National State Powers Alliance for the voters to see. In addition, H.E. also stressed the importance of electoral security for the voter and the candidate.