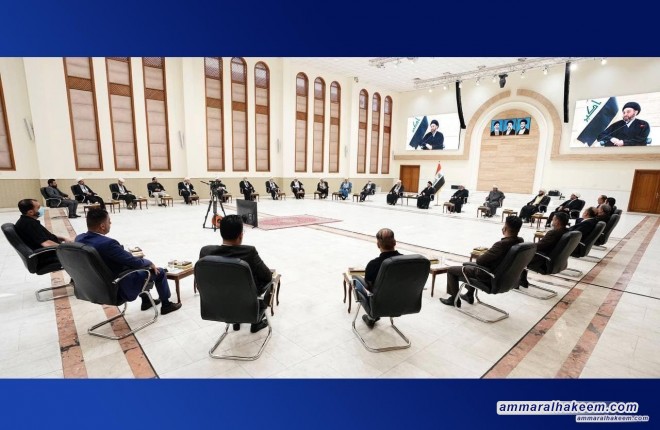 Sayyid Ammar Al-Hakeem, head of the National State Powers Alliance, received the delegation of the religious scholars from beloved Palestine and Lebanon this afternoon. Their visit coincided with the 40th of Imam Hussein "Peace Be Upin Him" on Wednesday, September 22, 2021.
His Eminence praised the excellent timing of the visit and the positive messages it sets out.
His Eminence commended the Palestinian people's steadfastness and how they are confronting the systematic targeting of their religion, their land, and their affiliation. H.E. also said that the Palestinian people are the only people who gets targeted for their Islam and belonging to their land, which makes Palestine the first cause of Islam and Muslims.
His Eminence also said that Palestine is the direction and the destination, as well as pointing out that this cause is our priority, despite the attempts to divert its path by creating other crises.
His Eminence also recalled the positions of the Great Religious References with the Palestinian cause, especially the position of Imam Sayyid Mohsen Al-Hakeem, "May Allah Sanctify his Soul" when he called to support the Palestinian people and sent to the Rulers and Kings asking them to support Palestine, as well as his fatwa that was on the permissibility of defending Palestine and considering whoever's killed in this battle as a martyr and the permissibility of paying zakat to support the Palestinian cause and others.