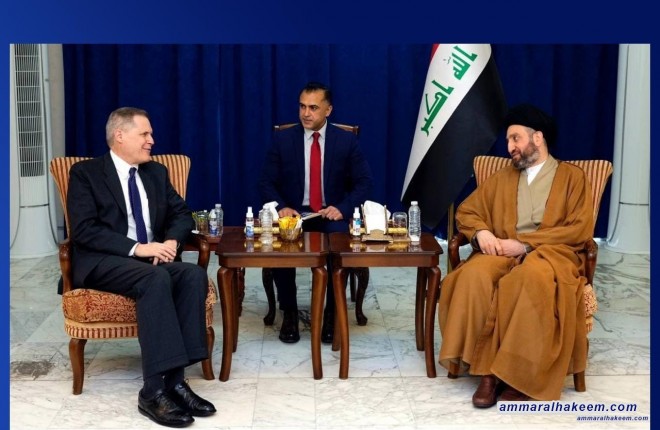 Sayyid Ammar Al-Hakeem, head of the National State Powers Alliance, received the Ambassador of the United States of America, Matthew Tuller on Monday, November 2, 2021, the two sides discussed the developments of the political scene in Iraq and the region, the outcomes of the recent parliamentary elections, and the bilateral relations between the two countries.
His Eminence affirmed his previous stance which states that it’s necessary for the Independent High Electoral Commission and the Judicial authority to ensure taking all of the necessary measures that would reinforce the trust of the citizens and the political powers in the elections and all that will aid its transparency as well as reflecting a positive image of the Iraqi democracy.
His Eminence also called upon the objecting political powers to adopt a more peaceful and legal means to claim their rights. Furthermore, H.E. stressed the importance of the upcoming Iraqi government that it will achieve the Iraqi aspiration and lead the country towards prosperity and stability through achieving comprehensive development.
His Eminence renewed his stance on the importance of proceeding with the Iraqi interest in mind when it comes to relations with the countries of the world and also to promote the bilateral ties with the United States of America, especially in the economic and services aspects. In addition, H.E. emphasized the importance of dialogue as the best way to address all issues and resolve crises in the region.