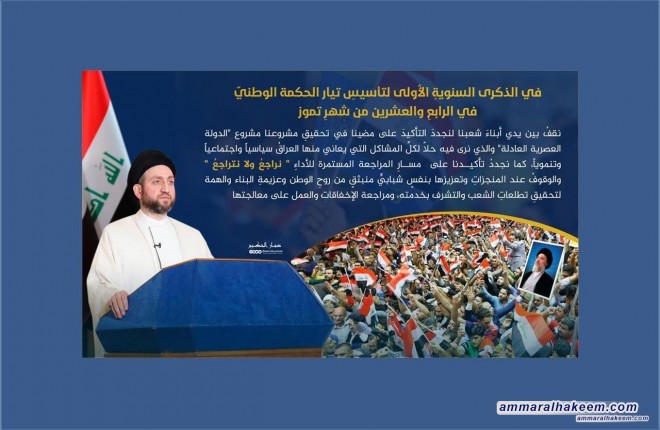 On the first anniversary of founding the Al-Hikma National Movement, 24/7/2018, Head of the Al-Hikma National Movement, Sayyid Ammar Al-Hakim stressed that the Al-Hikma movement will remain present for wisdom and for a moderate and fair Iraq that look forward for political, economic and social construction. His eminence congratulated the movement members marking the anniversary of founding the movement, and urged the upcoming Al-Hikma movement parliament bloc to set overhauling civil service as a goal, an approach and a top priority.
His eminence indicated that the Al-Hikma movement has a project capable of achieving the aspirations of the citizen and providing civil service and it is the highest honor above all, called on political powers to expedite forming the government of service that is accountable of fulfilling the demands of citizens which are provision of services and achieve a comprehensive development, reiterated the movement’s support to the rightful demands of demonstrators, and called preserving the peacefulness of demonstration and protecting public and private properties.
Sayyid Ammar al-Hakim, stated that “the Al-Hikma movement is a new political movement that is born from the pains and challenges faced by Iraq, and renews the promise and commitment to this people by being set frim on the objective approach and to defend the national unity despite of all ordeals.” His eminence affirmed proceeding to achieve the Fair Modern State project as a solution to all political, social and developmental issues, plus emphasizing on the “Reviewing not Retreating” course of action, and supporting achievements through strengthening it by young people stemming from the determination to build, realization of people’s aspirations, monitoring and working on addressing failures.