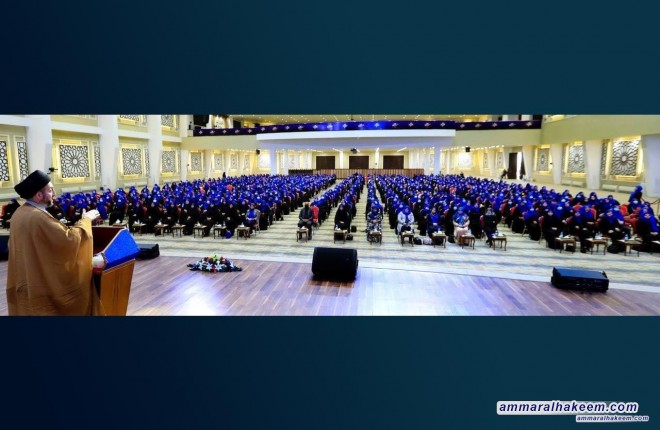 Sayyid Ammar Al-Hakeem, head of Al-Hikma National Movement, during the conference of leaders of women’s organization in Al-Hikma National Movement August 4, 2021, praised the role of Iraqi women, pointing out the importance of investing the blessed month of Ramadan in worship, getting closer to Allah Almighty, helping the weak, and taking care of public affairs.
In his speech, His Eminence said, "The comparison between men and women is a comparison of differentiation and there is no discrimination. The woman is present wherever the man is, and the preference in the Qur'anic text takes precedence over objective criteria such as piety, faith, science, and jihad," indicating that Al-Hikma is characterized by empowering women and the presence of many effective and influential women leaders, illustrating that leadership is an effect and that this feature must be present in the leading man and the leading woman, stressing that this is proven by the level and area of influence in people and the importance of communicating with the female youth.
His Eminence referred to the challenges of the current stage, recalling the project of the cross-component alliance and his call for a social and political pact. These two projects represent an entry point for resolving the Iraqi crisis at the current phase, pointing to the nature of the upcoming elections and describing them as fate-defining, stressing the importance of spreading optimism and the voice of moderation and separation between state and non-state powers, calling to urge people to participate consciously, effectively and broadly in the elections.