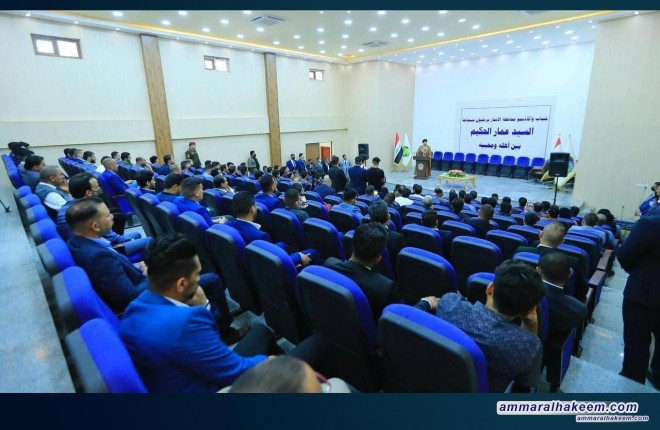 Sayyid Ammar Al-Hakeem, head of the Iraqis Coalition, met several Anbar academics and youth on Saturday 10/4/2021, and exchanged views with them on the developments in the political and social scene in Iraq, praising Anbar for its success story in the field of reconstruction and services.
His Eminence illustrated the centrality of Iraq throughout history and its position in humans and civilizations migrations and settlements, and the prophets “Peace Be Upon Them”, including the central role of Iraq as it is in Islam was the first country to which the Islamic message spread to after the Arabian Peninsula, referring to the Iraqi reality and the division over it between the point of view of others, and the point of view of the Iraqi people. By saying, “The others see Iraq differently, the way that is being reported by the media, and Iraqis see an emerging and promising project and an experience in which nothing but positives are accumulating day after day.”
His Eminence stressed the empowerment of the state powers, the moderate powers that is. Indicating that all the dire conditions we are experiencing is due to the weakness of the state, and the more the state strengthens, the more all these precursors disappear and fade. Also stressing how defining and pivotal the upcoming elections will be, and that we are betting on the citizen’s awareness to empower the Powers of moderation and neutrality and the Powers that believe in dialogue and public interest, and once again to renew its vision of the Cross-Component Alliance which is a solution to the current crisis, it will cut off the road to abusing people for electoral gains.
His Eminence explained the importance of the economic treatment of the Iraqi situation, indicating that opportunities are born from the womb of challenges and that the relationship between them has a direct correlation. Whenever there are great challenges, opportunities are of their size and momentum, pointing out the importance of investing the youth energies and equality in job opportunities, by saying that the House of Representatives did the right thing when it assigned the task of employment to Federal Public Service Council.