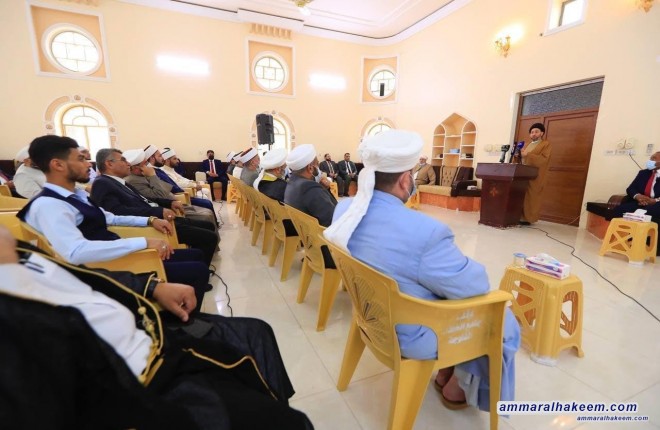 During his visit to Anbar Governorate, His Eminence had a stop in the district of Fallujah and met the religious scholars at Al-Khulafa Mosque on Saturday 10/4/2021, where His Eminence valued the warm welcoming and reception, stressing in his speech the importance of demonstrating the truth of the tolerant and moderate Islamic religion, and that terrorism was targeting Islam and the Sharia of the Messenger Allah "may God bless him and his family and grant them peace", before targeting any other titles. Also indicating that to be a part of a sect is reading, enrichment, culture, yet sectarianism is a scourge that plagues society. Sectarianism is not societal and the evidence for its rejection is great and many. His Eminence emphasized the importance of reconsidering the religious discourse and considering current developments, and the necessity to invest in technology. The tremendous scientific development and social media in the renewal of the means and mechanisms for conveying the Tolerant Islamic Message to the youth. His Eminence said, “The nation’s righteousness depends on the righteousness of its scholars, their moderation, their moral righteousness and their connection to the people, referring to the list of martyrs from Fallujah scholars who rejected extremism and refused to be nothing but moderate and morally right, calling on religious scholars in Fallujah to joint work and adopt joint projects for what serves the Iraqi people by proposing unity in all aspects to the People to gather them on a common word.