During the Second Ramadan lecture, The Most Dangerous Types of Murder are Murders Based on Opinion and Ideology 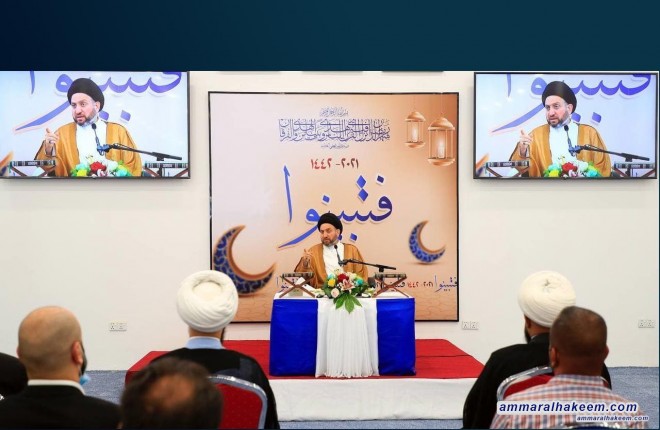 Sayyid Ammar al-Hakeem, head of the Iraqiun Alliance, addressed in the second Ramadan lecture in a series of lectures explained the “Message of Rights” to Imam Zain Al-Abidin Ali Bin Al-Hussein“Peace Be Upon Him”. Thursday 15/4/2021, The Qur’an verses that talk about murder. Sayyid Ammar Al-Hakeem Said that the first group of verses talk about the prohibition of killing The respected soul. While the second group of verses talks about the murder of prophets and reformers. The nature of the justifications that are presented for that, to murder the missionary project bearers for it strikes the interests of some and the size of their gains. Adding, "Herein lies the danger of targeting people based on their own opinions and ideology, and the right to live is one of the most important rights." His Eminence stated that killing is a breach of the covenant with Allah Almighty.” Moreover, the third group of verses talks about killing children boys or girls. Stressing on what results from the perpetrator of the sin of murder has lost both this worldly life and the hereafter. Moreover, Allah Almighty classifies him as one of the losers. The killer also suffers remorse throughout his life, lives in a state of humiliation, suffers from grief and distress, and lives in a state of constant affliction and testing. regarding the motives for killing, His Eminence said that killing has motives such as tyranny and shorthand of opinion in one person with arrogance. Its motives also include apostasy, fear of poverty, and the ignorance that leads to it. Adding that among the motives of killing is envy and wishing the demise of blessing from others. And sometimes attracting attention and getting close to others is a reason for killing. And among the motives for murder are corruption, obsessive thoughts, and killing a girl for the sole reason of her being a girl. Yet any human has emotional and dogmatic inhibitors and barriers that prevent him from committing the sin of unjustly killing.