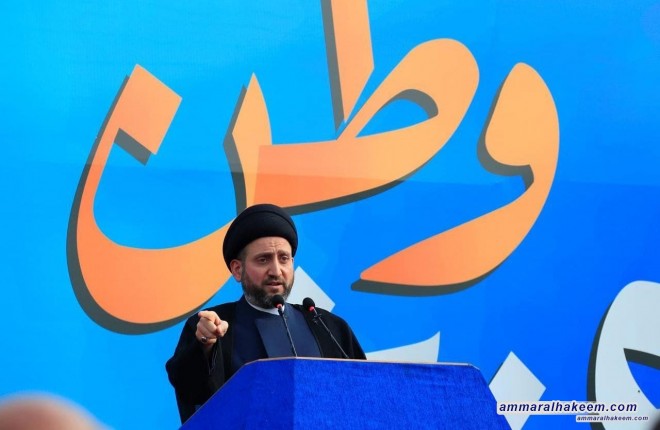 In the Name of Allah Most Merciful Most Gracious

Praise be to God, Lord of worlds may God bless our master Mohammed and his immaculate family and his chosen companions

During the blessed month of Ramadan, the month of obedience, worship, and divine hospitality ... we gather with hearts filled with faith, love, peace, tranquility, serenity, and mercy.

It was a divine destiny to lose an outstanding leadership figure the size of Aziz Al-Iraq, the eminence of Islam and Muslims, Sayyid Abdul Aziz Al-Hakeem (May God Sanctify His Secret) in these faithful atmospheres.

The comfort in losing him is our knowledge of his qualities, characteristics, project, sincerity, and services in the path of his life, and we ask Allah to help us to continue his journey and approach, and on the way of the eminence and carry his concern and dedication.

It is the right of fathers over their children to remember their deeds and merits, to fulfill their rights, and to take into consideration their stances and sacrifices, which is the matter that the sons of the movement of Martyr of the Altar (Shaheed Al-Mihrab) and Aziz Al-Iraq have committed to since their departure every year and every time...

We pledged to be the children of this missionary project and the national project, and bearers of its trust in the service of our country, our religion, and our sublime values, and we will remain so, God willing.

He had confidence in Allah, relying on him a lot, saying (O God - Allahumeh, you are my confidence and hope)... This high confidence in God made him brave and courageous in the most difficult and harsh circumstances, he had an iron will in the face of difficulties and troubles, and showed dedication and devotion in the face of crises and challenges.

All of this with the lack of opportunities and possibilities, difficult circumstances, and severe situations. In that, an eloquent and profound moral for all of us.

Whoever was with God will be in no need of others, whoever trusts God will be provided with bravery, pride, and honor, and whoever loves God will find love in people's hearts.

"But honor belongs to Allah and His Messenger, and the Believers"

He was devoted to his cause. Dedicated himself to his project, and avoiding emergence and jostling. As he was one of the students of Martyr Imam Sayyid Mohammed Baqir Al-Sadir. In addition, he was one of his closest comrades and companions, without competing to earn this title and he did not use his close connection to the Martyr Al-Sadir to consolidate his political and social status. In a similar way, he dealt with his brother Martyr of Al-Mihrab (May God Sanctify His Secret) who was a brother, a supporter, and advocate Shaheed Al-Mihrab, and was devoted to him and treated him with his title as a leader before a brother.

He avoided social and media appearances despite his great roles and perilous responsibilities in his religious, jihadi, and political life. This is one of the great moralistic lessons.

How do we favor the project and set it above our characteristics and ourselves? How do we achieve victory for our cause and goals? Not for ourselves!

How do we accomplish our tasks and duties without conflicts and expectations?

He was always forward-looking with high accuracy analyzing for situations, which gave him the ability to turn challenges into opportunities and ordeals into grants.

He committed to a trilogy (Values \ the Supreme Religious Cleric \ the National Project); he was committed to human, Islamic, and patriotic values. He was obedient to the directives, guidance, and recommendations of the Supreme Religious Cleric. He was steadfast and insightful in the National Project in order to build an independent country as well as stable, strong, Prosperous, and just.

He had a pivotal role in accomplishing numerous grand achievements in a record time with the help of his brothers and companions.

Giving some examples; running the elections, drafting the constitution and balloting on it, establishing an interim, transitional, and permanent Government. Putting an end to the sectarian tension and lifting chapter Vii Sanctions of the United Nations Chart. Also the issue of Iraq’s debt and settling it by scheduling it in Paris club in. addition to, scheduling the United States forces withdrawal from Iraq and many more.

In his life, he committed to a trinity (humility with people, using wisdom in dealing with matters, and strength in obtaining rights).

In his meetings with people, he was close to them, listened to their concerns, interacting with their issues, and showed great humility with the demands of people.

However, at the same time, he was strong and invulnerable in getting back their rights.

So he became an invulnerable supporter against temptations, compromising, and strong-willed as a mountain when facing threats and challenges.

In his visits to the most important global and regional capitals, he used to act from the standpoint of national patriotism and Iraqi pride. That’s how he was in his visits.

He used to see politics framed by morals, values, and people’s interests. Not lies, deceptions, manipulations, and turning stances.

He was honest in his words, clear in his manners, and far from manipulation and deception even when it comes to his rivals.

He was tough in negotiations and committed to the promises he gave no matter the costs.

His capital was his credibility, his promises, and his stance.

During one of my visits to him in the last weeks of his life, he said to me, “I have made it to the end of the road, in these days, I am reevaluating my stances in life, and I asked myself, what if the clock runs backward what stance will you take Sayyid AbdulAziz? After scrutiny and I say it clearly, I would have chosen the exact same path I walked on. How staggering it is for a human being to reach the final destination, feel no regret or remorse, and know that he spent his life, effort, and time to what it deserves to be spent on.

My Dear Brothers and Sisters, we should be inspired by the lessons and morals of this exceptional leadership figure in order to build our national project, and I summarize this in points:

Aziz Al-Iraq believed in the necessity to preserve Iraq’s unity on land, people, and society

Some may think that Shiite Unity and Shiite Harmony summed the era of Aziz Al-Iraq, and this is true, for Aziz Al-Iraq saw the prelude necessity of uniting Shiite ranks for the unity of national ranks.

However, not on a narrow sectarian nor a narrow doctrine background, but rather him believing that the larger social component bears the greatest responsibility to unify the ranks, open minds, and cohesion with other components.

Aziz Iraq was proud of his affiliation to Ahlu Al-Bayt (peace be upon them) and committed to the establishment of Al-Hussain rituals and their revival, and he took pride in his affiliation with the Scholarly Hawza in Al-Najaf Al-Ashraf. In these sanctities, he saw a motivational, intellectual and ideological support towards building a single nation and unified homeland.

Aziz Al-Iraq was an Iraqi who loved his homeland and worked for it in an indomitable patriotic spirit. He defended all Iraqis with no exceptions. We are all interested in following this approach and consolidating the (unifying national identity) in which all Iraqis enjoy diverse affiliations without discrimination or marginalization.

National unity has been able throughout history to face the greatest ordeals, against all odds and preserving Iraq’s prestige and its urban heritage and makes it a master in stances and decisions.

We have a common interest. We have common security and we all are committed to one cause.

Iraq faces three options, either for the status quo to continue in a weak state or to descend towards the failed state or advance towards the successful state. Returning to the separation of the mass base from the political leadership is the most dangerous stage in the span of political regimes. Indicating that Iraq has gone through difficult circumstances and a great popular reproach for the political class. Expressing his hope that the upcoming early elections will be a cause to bridge the gap and cohere again…

I call upon the states' heads, political blocs’ leaders, and all the benevolent national power to (initiate a national covenant to pave the way for a safe transition through the forthcoming elections).

Aziz Al-Iraq (May God Sanctify His Soul) raised a slogan (Every Iraqi has a voice, and every Iraqi has the right to choose their representatives to write the constitution and political participation).

After two decades of the democratic system, the removal of previous barriers and obstacles, and the nature of social variables, we called and renewed the call for a new social and political covenant that develops the previous decade and dispels the concerns and fears that the founding conditions imposed.

The maturing of the democratic experience and the existing societal understanding are important motives for moving forward with the establishment of a new phase that is more stable and prosperous.

Aziz Al-Iraq raised a slogan (changing the unjust equation) he aimed to end the political monopoly equation by the one party, one clan, and one man. Also, today we are in dire need to break the standstill equation in our political field.

Today we are in dire need to break the paralyzing equations in our political field...

We are in need of a quadruple administration:

2- Managing diversity at the social level.

3- Managing ambition at the political level.

4- Managing interests at the regional and international levels.

Fourth: Managing Interest on a regional and international level

The government has presented the white paper and the Parliament’s Finance commission has presented practical proposals. Federations, trade unions, chambers of commerce, civil society organizations, and economy experts presented ideas to address the economic crisis, and yet now we need to:

Is to gather all of these thoughts and proposals. Classify them and turn them into a comprehensive national plan to rescue the economy. Moreover, to mobilize the political support for it from all of the national powers, and for everyone to adhere to the removal of (economy and services) file away from political jostling and rivalry, so we need to:

2- The distribution of roles.

4- All of this to face the challenges and predicaments.

We are in need of a smart regional security system that involves the neighboring countries. This security system's main campaign is fighting terrorism. Provided that it must be based on a strategical economic partnership linking the neighboring region countries interests together, turning the rumble into perfection among them thus moving forward to pervade the benefits, roles, interests, and stability.

All necessary preparations have been made to hold early elections... Starting with the House of Representatives voting to dissolve itself, forming the Federal Court, and setting the date for elections by the President of the Republic. Therefore, we call upon the Independent High Electoral Commission for more clarity and transparency in its procedures to provide the citizens with confidence in the electoral process.

We call upon the Independent High Electoral Commission to have more clarity and transparency in its procedures and to take the consultations of experts and senior specialists to achieve the best possible outcome, and to provide the citizens with the atmosphere of trust in the electoral process.

The new wave of the corona pandemic requires serious health procedures, especially in our people receiving the vaccination. I call the Iraqi people in general and Al-Hikma partisans in particular, to receive the vaccine and immune themselves from infection.