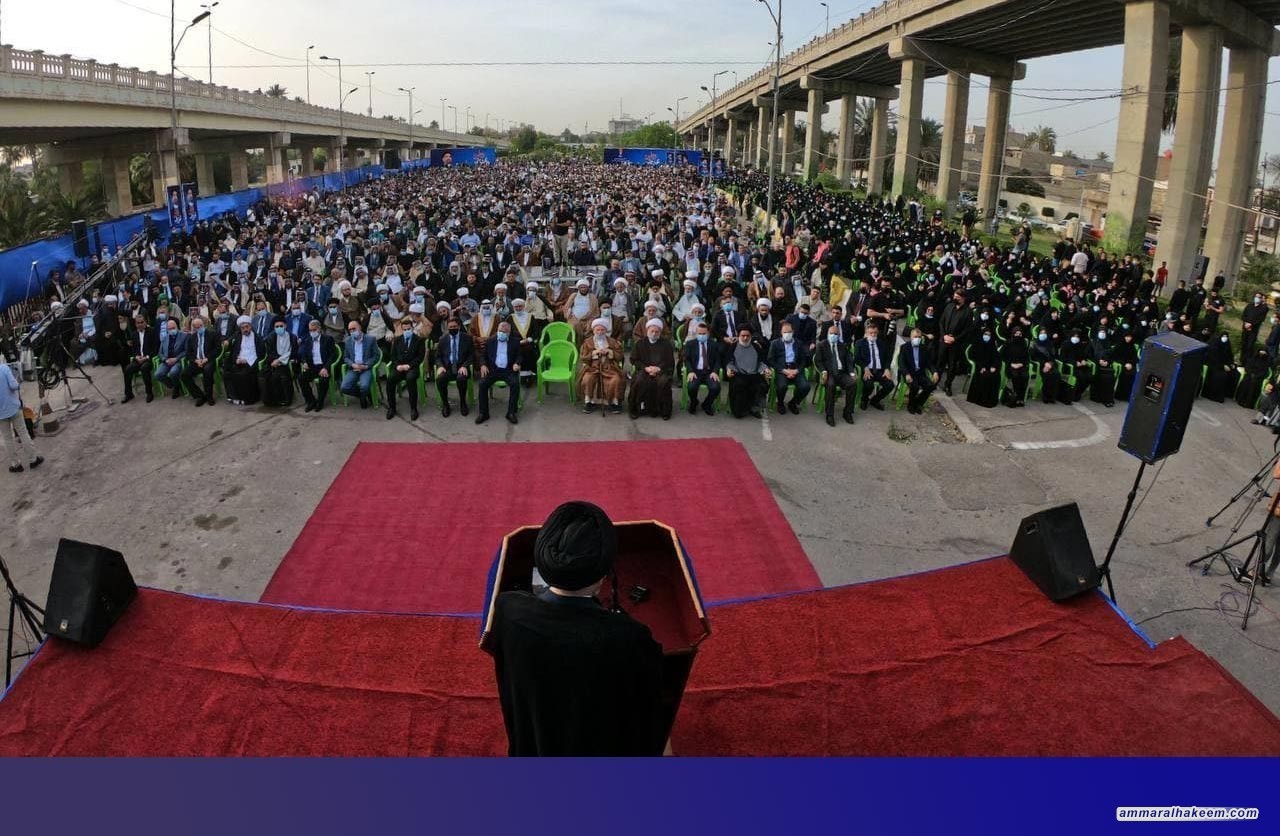 Sayyid Ammar al-Hakem, head of the Iraqiun coalition, called on the heads of state, leaders of political blocs and all the benevolent national power to launch a national covenant that paves the way for a safe transition through the upcoming elections. detailing his description, saying that we want a national covenant that will put an end to the continuous violations and attacks that impact the prestige of the state and the rule of law and stop the political undermining, extortion And media defamation, identifying national priorities, setting a framework for commitment by everyone, achieving electoral security, paving the way for the people to prevail, and being conscious in choosing whom deemed qualified to lead the country in the upcoming era. His Eminence said during the memorial service to commemorate the departure of Hujjet Al-Islam and Muslims, Sayyid Abdulaziz Al-Hakeem (Aziz Al-iraq) (May Allah sanctify his secret) in his office in Baghdad Sunday 4/18/2021 - 5 Ramadan. “Iraq faces three options, either for the status quo to continue in a weak state or to descend towards the failed state or advances towards the successful state. Returning to the separation of the mass base from the political leadership is the most dangerous stage in the span of political regimes. Indicating that Iraq has gone through difficult circumstances and a great popular reproach for the political class. Expressing his hope that the upcoming early elections will be a cause to bridge the gap and cohere again, Once again his call for a new social and political contract that develops the previous one and dispels the concerns and fears imposed by the conditions of the establishment. The maturation of the democratic experience and the existing societal understanding are important motives to move forward with the establishment of a new, more stable and prosperous phase. His Eminence stressed the need for Iraq to break the standstill equations in our political field. The equation of political, sectarian and national regression, and to change them with brave alliances that goes beyond the components and the equation of partisan quotas and change them with broad national alliances that end the chaos and personal interests and the equation of monopolizing political decision and restoring the balance by giving way to broader participation in decision-making. Stressing the need for a quadruple administration through good governance at the level of state institutions, managing diversity at the social level, managing ambition at the political level, and managing interests at the regional and international levels. His Eminence stressed Iraq needs an economic rescue plan for the country, referring to what the government presented as a Blank paper and represents its vision to address the economic crisis in the country. While the Finance Committee in the Parliament presented practical economic ideas and proposals. In addition to what federations, trade unions, chambers of commerce, civil society organizations and economists experts presented Important ideas to address the economic crisis, calling for collecting all these ideas and proposals, classifying them and converting them into a comprehensive national plan for economic rescue. Mobilizing political support for it from all national powers and uniting all to keep the (economy and service) file away from political scramble and competition. Emphasizing the need to unify stances, distribute roles and define Responsibilities to overcome difficulties and face challenges. Pointing out the region’s need for a smart regional security system that includes all countries of the region. Its main campaign is fighting terrorism, if a strategic economic partnership that links the interests of the countries of the region to each other and turns the rumble into perfection among them to pervade benefits, roles, interests and stability.

His Eminence assured the completion of all necessary preparations for holding early elections by the parliament voting to dissolve itself, forming the Federal Court, and setting the date for the elections by the President of the Republic. Calling on the political and the power of the people to prepare for the elections, the appropriate preparation for it, and the broad, active and conscious participation in it. In addition, his eminence addressed the Independent High Electoral Commission to have more clarity and transparency in its procedures, and to take the consultations of the specialists and experts to achieve the best possible outcome and provide an atmosphere of confidence for the citizen in the electoral process. Indicating that the new wave of the Corona pandemic requires seriousness in health measures, especially receiving the vaccine. calling on the Iraqi public in general and Al-Hikma Partisans in particular to receive the vaccine and immunize themselves from infection.

On his memorial, His Eminence said that Aziz Al-Iraq believed in the necessity of preserving the unity of Iraq as a land, people and society, indicating that Aziz Al-Iraq believed that the unity of the Shiite ranks was a necessary prelude to the unity of the national ranks. Not against a confessional or narrow sectarian background, but rather in his belief that the larger social component bears the greater responsibility in uniting the ranks. Openness and cohesion with other components, indicating that Aziz Al-Iraq is proud of his belonging to the Ahlu-al-Bayt (peace be upon them) – the Prophet Mohammed’s family (Blessing of Alla Be upon Him). Moreover, he is committed to the establishment of Al-Hussain’s rituals and their revival. In addition, He takes pride of his affiliation with the scholarly Hawza in Al-Najaf Al-Ashraf and he had a vision in these sanctities as an intellectual and ideological support to build a single and a unified nation. Adding: "Aziz Al-Iraq was an Iraqi who loved his country and worked for it with an indomitable patriotic spirit. Moreover, defended all Iraqis without exception. Holding everyone responsible for following this approach and consolidating the unifying national identity in which all Iraqis enjoy all their different affiliations without discrimination or marginalization". Emphasizing on unifying the national stance, the vision and the word, we will not be able to face the economic crisis with our dispersed opinions; nor will we be able to encounter the security challenges with our sparse minds; nor will we be able to face the political obstacles with our discordant hearts. "His eminence among the characteristics of Aziz Al-Iraq (May God Sanctify his secret) by saying that he was armed with confidence in God Almighty, loyal to his cause, dedicated to his project, avoiding appearing and jostling. He had a forward-looking ability and high accuracy in analyzing situations, which made him turn challenges into opportunities and tribulations into grants. As well as, his equation in life that is represented by the trilogy of humility with people, rationality in managing matters and power in obtaining rights. Calling to take the inspiration of lessons and morals from this unique leadership figure to build our national project.