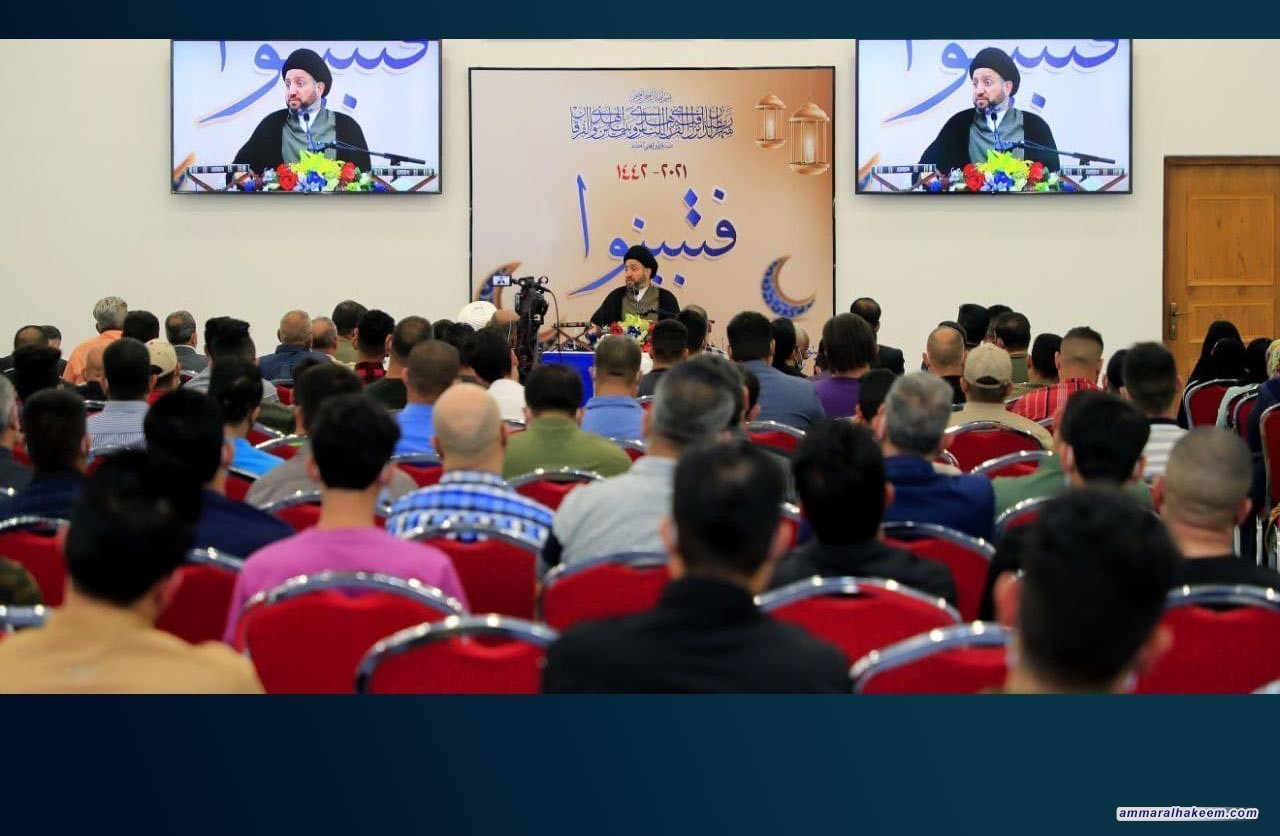 Sayyid Ammar Al-Hakeem: Retribution One Of The Most Important Impediments To Stop People From Falling Into Unjustly Murder

Sayyid Ammar al-Hakim, head of Hikma National Movement, continued in the third Ramadan lecture 4/19/2021, his talk about the message of rights of Imam Ali bin Al-Hussein "peace be upon them", and his brief pause at the right of hand (the rationalized decisions within the limits of Allah Almighty) and its metaphorical significance. Indicating the nature of the testaments of injustice and he stood at the injustice of murder and said, "Murder represents the eleventh testament of injustice is in the Holy Qur’an, and we have come to restraints and prevent people from falling into the injustice of murder."
His Eminence stated that one of the Qur’anic testaments that prevent injustice is the fear of Allah Almighty, and the fear of the social consequences of killing. The closer the person to Allah, the greater his fear of falling into the injustice of murder, affirming that man is the work of Allah and his possession and it is not permissible to transgress against him except with what Allah has commanded. While hiring a person means owning his work, effort, and experience.
His Eminence referred to the second impediment represented by retribution, despite its meaning, which speaks of killing the murderer as retribution against him, as retribution is a deterrent that prevents falling in sin, thus achieving social deterrence. Pointing out the nature of the divine punishment and the torment resulting from murder. Because knowing the punishment is a deterrent from falling into murder.
His Eminence explained that one of the testaments of injustice is also the perpetration of sin against a human soul, and this has many consequences. The Qur’an indicates that sinning involves injustice to the soul mainly; noting that one of the effects of a person being unjust to himself in sinning is the economic impact. Consequently, sin leads to a scarcity of livelihood, and sometimes the livelihood is money and sometimes it is offspring. As well as the disobedient suffers the effect of indignity and humiliation, just as arrogance represents another effect of sin according to the Holy Qur’an.