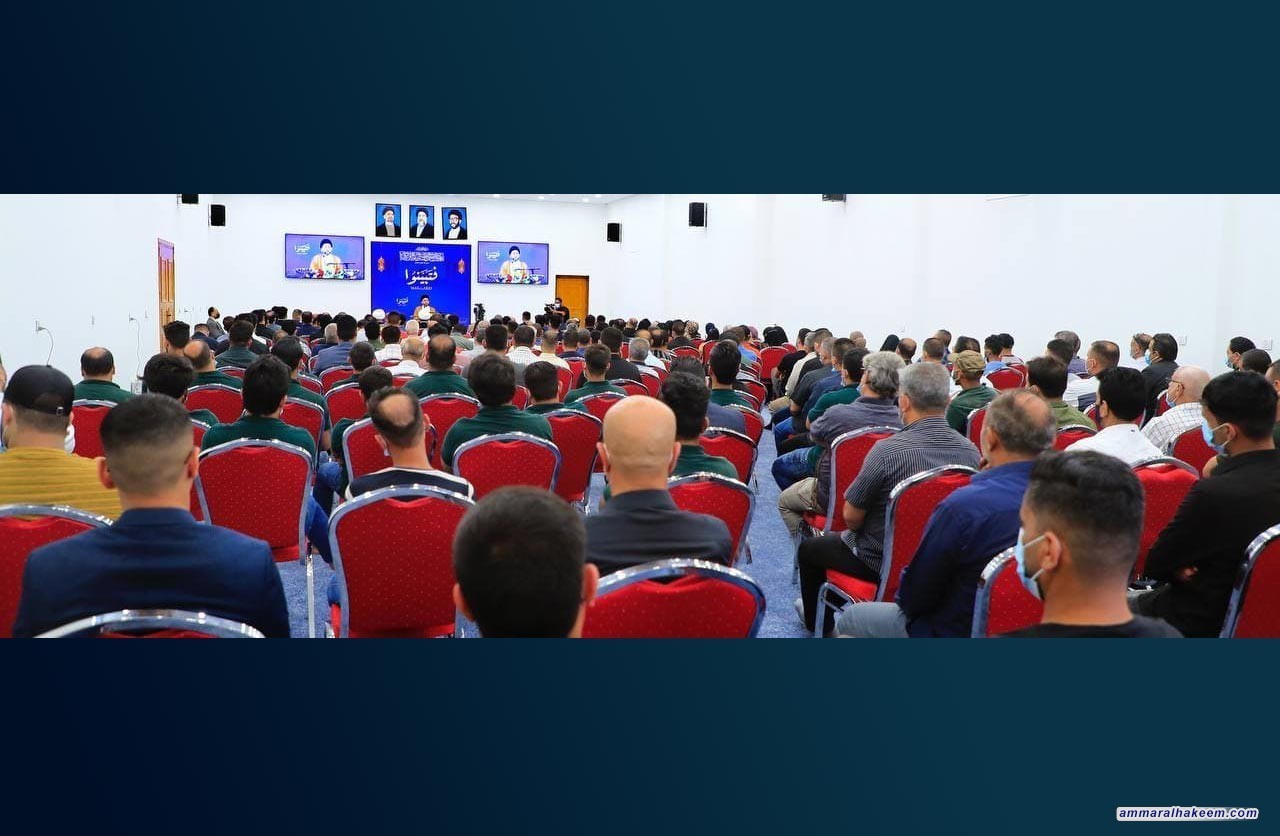 Sayyid Ammar al-Hakeem, head of the National Wisdom Movement, continued in the sixth Ramadan lecture Thursday 22/4/2021, his speech in the message of rights to Imam Zain al-Abidin Ali bin al-Hussein (Peace Be Upon Them) as it was about the seventh right, which is the right of the hand and in its metaphorical meaning, including the implications of the hand from  good or bad deeds, and one of its clearest applications is injustice, reviewing its Holy Qur’anic testaments, as sin and committing a sin were the twelfth of these testaments, while he referred to the consequences of sin and disobedience, with twenty-eight implications: His eminence indicated that the destruction of cities is the twenty-ninth impact of sin, while The destruction of people of all kinds and causes was the impact of the thirty effects of sins and misdeeds, pointing to the motives of disobedience in the Holy Qur’an, and the presence of Satan and his desire to inflict human disobedience and adorned disobedience to man is the first motive, as Allah Almighty warns and forbids servants from falling into Satan's webs and recommends keeping away from And considering him as an enemy. Regarding arrogance, hubris, self-conceit and pride in opinion among the motives for disobedience, and the third motive is extravagance. His Eminence is among the motives for disobedience, also arrogance and hubris, as well as turning away from Allah Almighty and not being afraid of Him, as well as misleading propaganda that confuses the scene and increases the chances of a person falling into sin and works to discourage and frustrate people and falsify the facts. It is a renewed propaganda in every time and space whatsoever according to its priorities, methods, and ways of its impact, indicating that it is not possible to talk about the motives of disobedience without referring to blind adherence to wrong customs and traditions, and we praise Allah Almighty that most of our customs and habits are consistent with religious teachings and legislations except for a few that need addressing and a societal stance. in addition, ignorance, escaping truth towards falsehood, holding expenditure and refraining from helping the poor are all motives for falling into sin, and a person may suffer a kind of vanity when he believes that his money and potentials come from within himself, denying the grace and care of Allah. Concluding his speech by saying that “Among the motives for disobedience is also seducing women and achieving seclusion with a foreign woman, and the woman’s reliance on soft, melodic speech in addressing men to make them commit sin, as well as loving the world as an important part of its motives, and as mentioned in the novel, is the head of every sin”.