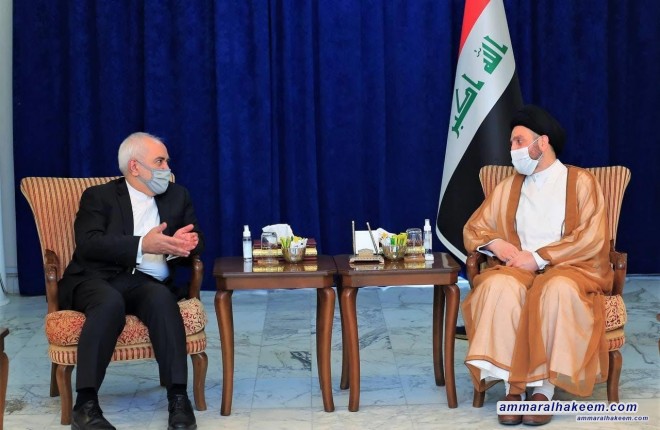 Sayyid Ammar al-Hakim, head of Iraqiun Alliance, received this morning, Iranian Foreign Minister Dr. Mohammed Jawad Dhareef, and discussed with him Iraq's and international affairs developments, and the relations between the two countries. His Eminence stressed the importance of strengthening bilateral relations between Baghdad and Tehran in a way that serves the interests of the two neighboring countries. Stressing the importance of the upcoming Iraqi elections, as they represent an opportunity to change Iraq's reality and push for the stability of the political situation and the ensuing overall stability in the country. His Eminence indicated that Iraq welcomes his regional and international community and keen to establish the best possible relations with everyone in a way that preserves Iraq's interests and sovereignty. While reiterating the need for peace and adopting the dialogue as a mean to resolve differences. As well as reaffirming that, everyone must commit to the real dialogue that will put an end to crisis and conflicts.