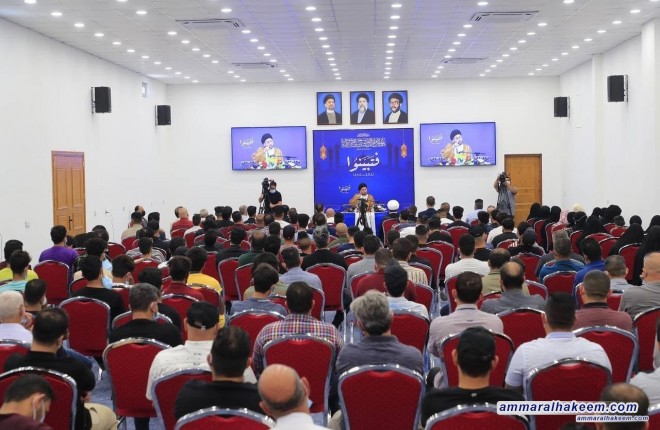 Sayyid Ammar Al-Hakeem, Head of Al-Hikma National Movement, in the tenth Ramadan lecture continued his search in the Message of Rights for Imam Zain Al-Abideen “Peace Be Upon Him” and carried on the talk on the Testaments of Injustice and reached the fourteenth testament which is the cruelty of heart and mentioned some of its implications using Qur’an as evidence.
His Eminence said that depravity and indecency are the eighth implication that comes with heart cruelty, the more a person’s heart is hard the closer he was to indecency and depravity.
Killing and taking away lives is another implication, as heart cruelty drives a person to killing forbidden souls without right. Many of the Qur’anic verses reveals that killers are all hard hearted towards their offspring hiding behind weak excuses like sacrifices for gods and what not.  Indicating that a hard hearted person always feels missing and selfishness and misled. Living in a constant self-trust issues, living selfishly and psychologically disturbed. Being misled is another consequence of heart cruelty.
His Eminence indicates that withholding response to Allah’s Revelations and Signs is the twelfth implication of heart cruelty, where a person might have psychological barriers held up due to his hart cruelty keeping away the acceptance of Allah’s Revelations and Signs.
His Eminence moved on to the fifteenth testaments of Injustice mentioned in the Holy Qur’an which is the Innovation meaning that they change the rule of Allah and defy the Law of Sharia with unholy practices and doings. And he talked about the implications of Innovation and Innovators in the Holy Qur’an.
His Eminence considered the Devine Threat and Intimidation is the first implication. As the Innovator put himself under the Threat and Intimidation of the Creator Most Glorified and Exalted. As the Innovation leads its Innovator to loss, misled, deprivation of success, the faulty ending, transgression on others and disobedience and rejecting adhering to the Laws of Allah. The innovator’s pride taketh him to sin and insists on mistakes. Pointing out the motives of Innovations Saying “Ignorance and following one’s desires leads to Innovation as Qur’anic Revelations tell us”. As well as Satan is another motivator as he decorates the forbidden and pushes towards Innovation, as well as to disbelieve in Allah is another motive for Innovation.”