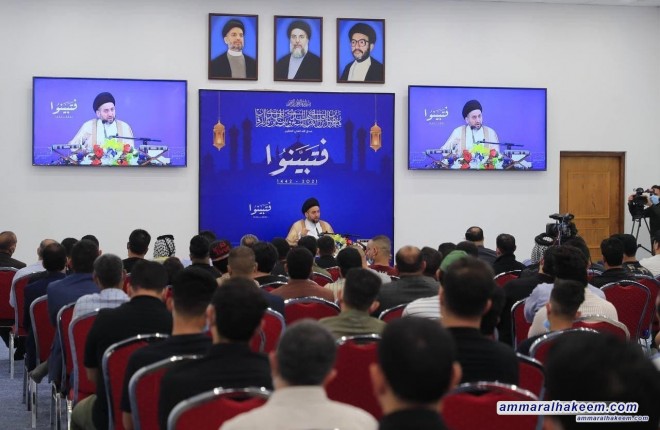 Sayyid Ammar Al-Hakeem, head of Al-Hikma National Movement, continued in the eleventh Ramadan lecture on Thursday 4/29/2021, his message of rights to Imam Zain Al-Abidin Ali Bin Al-Hussein “peace be upon them”. His Eminence continued the talk on Injustice Testaments in the Holy Qur’an and after mentioning 15 Testaments in the previous lectures. He illustrated that blasphemy is the sixteenth testament, and that Blasphemy in Allah’s grace is denying Allah’s grace and virtues to humans. Mentioning the story of Children of Israel and Allah’s grace and care upon them, while their responded with blasphemy, Angering Allah. His Eminence showed the implications of blasphemy in the holy Qur’an, and they were loss, bankruptcy and losing everything in addition to hunger and fear. He also noted that the Qur’anic Verses points out the generosity of Allah’s Grace, sometimes the verses points to safety and sometimes peace and tranquility and other times it points to wealth and offspring. Here we must affirm the necessity of reforming the lives of a country as it’s a shared responsibility that each individual must bear and hold. The societal, corruption ending, providing services and state’s building reform testament is through the active participation in elections and that the strong, the competent and the honest must bear the responsibility referring to Allah’s (most gracious, most merciful) words “Allah Almighty changes the fate of no people unless they themselves show the will for change”.
His Eminence stressed that to solve the nation’s problems is by holding each citizen the responsibility, otherwise Allah’s grace will vanish due to our blasphemous deeds, denying the blasphemous the contentment and love of Allah Almighty. Allah loves a thankful worshipper. His Eminence considered Blasphemy a testament of Injustice and it has its motives just as the other testaments, the first of these wronging oneself testaments are luxury, convenience and exploitation of power and authority. Thirdly, Allah’s test to humans, when Allah’s grace is given to the unjust, he will say it’s my own work, yet when Allah takes away the grace to test him, he will despair and blaspheme. His Eminence added that one of the injustice testaments of Blasphemy in Allah’s Grace is denying the verses of the Holy Qur’an and not giving in to the words of Allah Almighty, as well as not thanking Allah for the power of senses of sight and sound.
While the fourth testament of blasphemy is denying oneself from guidance as the denier of Allah’s Graces disqualifies from guidance.